There’s a devil loose: Thugs beat Brooklyn woman, 30, unconscious and STOMP on her head as they steal her belongings in latest example of NYC’s raging violent crime epidemic 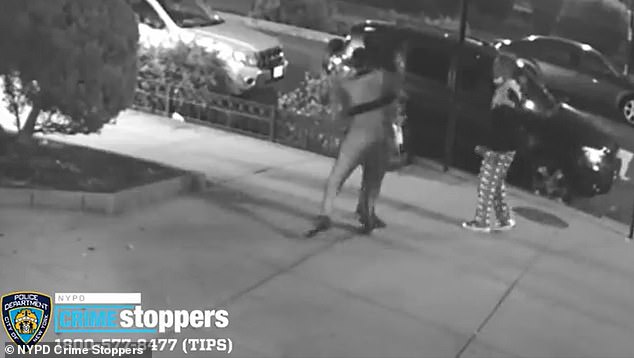 Newly-released surveillance footage shows the moment two people stomped on a Brooklyn woman’s head, leaving her unconscious, as they stole her purse and other belongings.

In the video, released by the New York Police Department on Tuesday, an unidentified man and woman could be seen approaching a 30-year-old woman in the Brownsville neighborhood of Brooklyn on October 6 at around 3.15am.

The female suspect immediately grabs the woman and starts punching her in the head, causing her to fall head first into the wrought iron fencing around a sidewalk planter.

As the victim laid on the ground, the female suspect continued to punch and kick the victim, leaving her unconscious, as the male suspect grabs the victim’s purse, two cellphones, cash and a neck chain, according to Pix 11.

After he is done, the female suspect could be seen stomping on the victim’s head at least seven times as she laid on the ground motionless.

The victim was rushed to a nearby hospital for treatment of trauma to her head and face, Pix 11 reports, and was believed to still be hospitalized Wednesday morning.

NYPD officials believe the incident stems from a prior encounter between the victim and the female suspect.

It comes amid a rise in crime throughout New York City, with felony assaults up 7.7 percent from the same time last year, and misdemeanor assaults up 6.1 percent.

Police are now offering up to $3,500 for any information that could help identify or locate the suspects in the attack.

Anyone with information is encouraged to call Crime Stoppers at 1 (800) 577-TIPS.