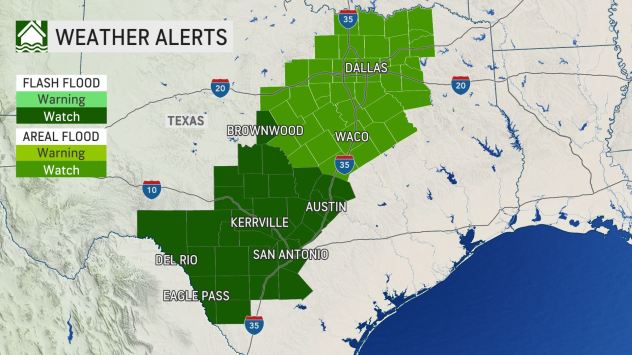 Pamela will not only pose significant dangers across Mexico, as it pushes inland after making landfall as a Category 1 hurricane Wednesday morning, but its impacts will also be felt across parts of the United States while it treks farther inland. Excessive rainfall and flash flooding are predicted in portions of central Texas after Pamela arrives as a tropical rainstorm by late week. The system’s interaction with a non-tropical system will enhance rainfall further.

Pamela made landfall near Estacion Dimas, Mexico, early Wednesday morning with 75-mph maximum sustained winds. At 9 a.m., local time, Pamela had already lost some wind intensity and was a tropical storm with 65-mph winds, according to the National Hurricane Center. Just seven hours later, it had weakened to a tropical depression with maximum sustained winds of 35 mph. By the time the system reaches the U.S., it may no longer be an official tropical system, but as a tropical rainstorm, Pamela will still pose risks to lives and property in Texas.

“A significant flash flooding risk will occur across parts of Texas in the coming days as tropical moisture from Pamela is drawn northward and interacts with an intensifying storm system over the central United States,” AccuWeather Chief Meteorologist Jonathan Porter said.

Drenching showers and thunderstorms due to the approach of a cold front can saturate the soil and lead to runoff in some cases into Wednesday evening. Isolated incidents of flash flooding can precede the arrival of Pamela’s torrential rain.

As Pamela pushes over land, the system will continue to lose wind intensity. By the time Pamela moves northeastward across central Texas, it will likely be a tropical rainstorm. AccuWeather forecasters warn that it will still be a potentially dangerous system and unleash life-threatening flooding and carry the potential for serious property damage and travel disruptions.