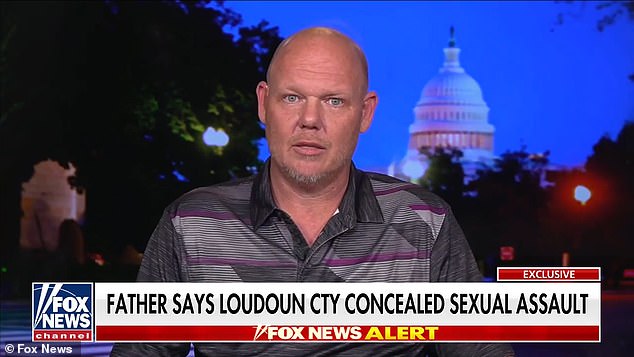 The Virginia father who was arrested at a school board meeting while protesting its proposed transgender policies after claiming his daughter was raped in a girls’ bathroom by ‘skirt-wearing’ male student has slammed Merrick Garland for threatening parents who protest school boards.

Scott Smith, 48, appeared on Fox News’ The Ingraham Angle and spoke out after he was photographed being dragged out of a school board in Leesburg, Virginia meeting this June and was painted by the left to be a deranged, right-wing bigot.

Smith told host Laura Ingraham that his daughter was sexually attacked at Stone Bridge High School on May 28 by a boy ‘wearing in a skirt’ who took advantage of the school’s trans policies to get into the girls’ bathrooms and assault her.

And he slammed Attorney General Merrick Garland for clamping down on protests at board meetings.

The Justice Department announced last week that the FBI would now investigate and prosecute any parent who it deems to be ‘threatening’ towards school staff.

The order from Garland was in response to a request from the National School Board Association to President Biden, asking him to protect them from angry parents.

Garland said: ‘Threats against public servants are not only illegal, they run counter to our nation’s core values. Those who dedicate their time and energy to ensuring that our children receive a proper education in a safe environment deserve to be able to do their work without fear for their safety.’

Smith told Ingraham: ‘That’s really scary that our government will weaponize themselves against parents and using my video across the nation to spread fear.

‘That’s wrong. I am not a bully. I am not a racist. I love everyone. I love this country. I want better stuff for it.’