Rolling Stones retire ‘Brown Sugar’ after criticism over slavery lyrics: Keith Richards says 50-year-old song is about ‘horrors’ of the slave trade but he’s tired of fighting with people ‘trying to bury it’ and band will not play it anymore 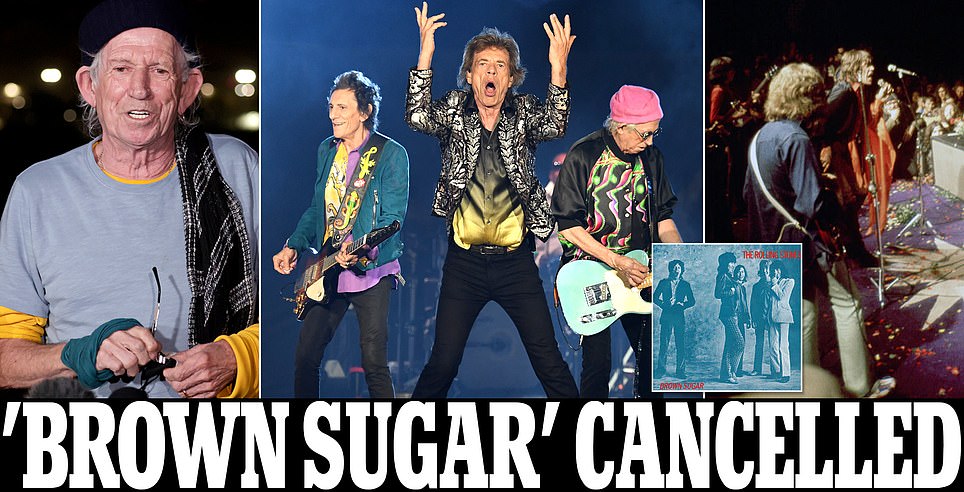 Mick Jagger and Keith Richards have confirmed that the Rolling Stones have shelved one of their most-played songs, because they were uncomfortable with the ‘nasty’ 50-year-old lyrics. Brown Sugar, written in 1969 and released in 1971, is the band’s second-most played song: only Jumpin’ Jack Flash has been performed by the band more often. But Jagger and Richards, currently in the middle of a 13-date U.S. tour, said they deliberately left the song off their setlist due to the lyrics, which begin: ‘Gold Coast slave ship bound for cotton fields, Sold in the market down in New Orleans, Skydog slaver knows he’s doin’ all right, Hear him whip the women just around midnight.’ Jagger, 78, pictured center performing in Nashville on Saturday night, said in 1995 that he would never have written the song nowadays, but told The Los Angeles Times on Tuesday that they were not opposed to bringing it back at some point. Richards, 77, (left) said he was bemused by the new-found anger at the lyrics, which he said were always about the ‘horrors’ of slavery, and he was trying to understand ‘quite where the beef is.’ He added: ‘Didn’t they understand this was a song about the horrors of slavery? But they’re trying to bury it. At the moment I don’t want to get into conflicts with all of this s***.’ The band will play in Los Angeles later this week, with two shows scheduled for Thursday and Sunday. It is their first ever tour without drummer Charlie Watts, who died in August aged 80, and Jagger and Richards both paid tribute to the beloved musician, who Richards said was a reluctant superstar but ‘one of the funniest guys I’ve ever known.’