‘It wasn’t my time’: State trooper dodges an out-of-control pick-up truck as he helps stranded driver with a blown tire 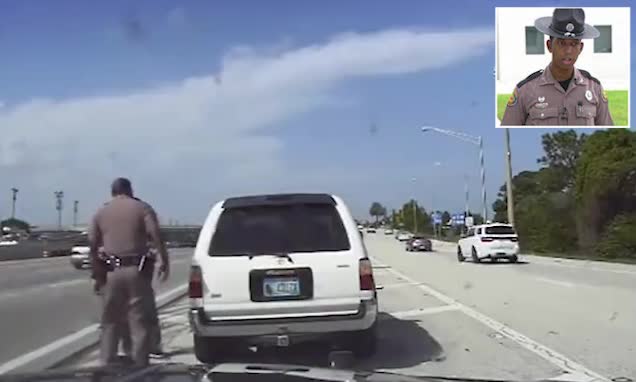 This is the moment a state trooper narrowly avoided being mown down by a runaway pick-up truck as he went to the aid of a stranded driver.

Dramatic dashcam footage captured Dominic Alexandre, 23, leaping clear as the silver truck careered into an SUV which had blown a tire on I-95 in Palm Beach County.

The SUV’s driver also had to jump out of the way as the truck was sent careening towards them by a three-vehicle, chain-reaction crash on October 7.

The woman sustained minor injuries to her legs and Alexandre was unhurt.

He told told CBS12 News: ‘I was able to hear the screeching sound of the pick up truck and I glanced to my left and I had a split-second decision to make, my life or get hit.

‘So I ran to the right immediately as fast as I can.’