Allen West Has Been Hospitalized With the Coronavirus; He Is the Challenger to Texas Gov. Greg Abbott, Is Unvaccinated, and Is Dedicated to Fighting Against Vaccine Mandates. He Has Received Monoclonal Antibodies and Suspended His Campaign 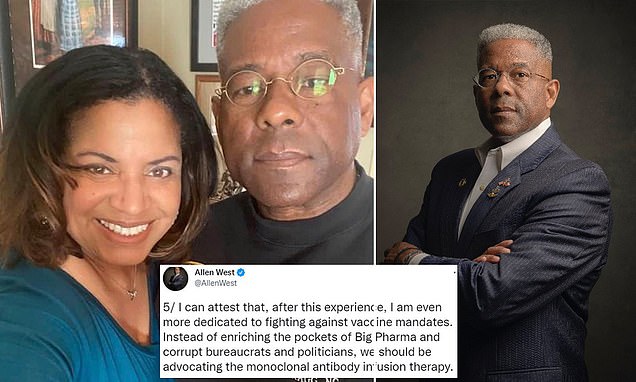 A Republican taking on Texas Governor Greg Abbott in the gubernatorial primary, who is unvaccinated against coronavirus, said his current case of COVID-19 pneumonia has only emboldened him to fight against vaccine mandates.

Allen West, 60, was admitted to the hospital on Saturday due to concern over his oxygen levels. His vaccinated wife, Angela, also contracted the virus.

‘Yesterday my wife, Angela, and I underwent monoclonal antibody infusion therapy at Advance ER in Dallas — special hat tip to the staff there for their care and professionalism. The results were immediate,’ West tweeted Sunday morning.

‘I can attest that, after this experience, I am even more dedicated to fighting against vaccine mandate,’ the Republican vying to take Abbott’s seat tweeted. ‘Instead of enriching the pockets of Big Pharma and corrupt bureaucrats and politicians, we should be advocating the monoclonal antibody infusion therapy.’

‘Instead of jabbing Americans, and not illegal immigrants, with a dangerous shot which injects them with these spike proteins . . . guess what? I now have natural immunity and double the antibodies, and that’s science,’ he continued.’

West vowed: ‘As Governor of Texas, I will vehemently crush anyone forcing vaccine mandates in the Lone Star State. There are far better protocols that individual citizens can utilize and decide for themselves.’

‘Our bodies are our last sanctuary of liberty and freedom,’ he wrote, ‘I will defend that for everyone, even the progressive socialist jackasses who must be saved from themselves.’

On Saturday, West tweeted that he and his wife completed monoclonal antibody infusion therapy.

The antibodies are used to treat those in the early stages of a coronavirus infection.