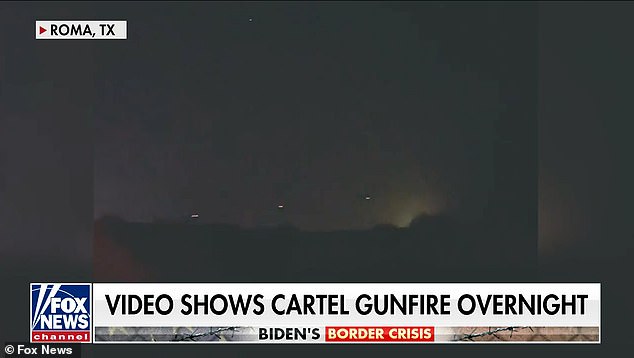 Video footage shows suspected cartel members firing multiple rounds across the border into the United States. Fox News’ Bill Melugin and his crew captured the gunfire on camera Thursday night from Roma, Texas, and said Texas National Guard soldiers stationed at the border have witnessed many cartel gunfights in the area.

Melugin witnessed the gunfire firsthand, calling it “remarkable” Friday on “America’s Newsroom.” He said National Guard members were unsure whether it was a cartel shootout or just an intimidation tactic.

National Guard soldiers told him armed cartel members have stood across the Rio Grande and taunted them multiple times in recent days.

Melugin reported that Roma, Texas, may be the busiest spot along the U.S.-Mexico border when it comes to illegal crossings and cartel activity.

Melugin saw multiple rafts carrying illegal immigrants come across the river into Texas. While the Texas National Guard was able to turn one boat back, he said they are on the lookout at all times.

“In the later night hours, we started seeing a constant stream of these rafts and these human smugglers, and they were bringing across hundreds of family units,” he said.