Bodycam captures moment Texas deputy finds three kids all aged under seven, who had been lost in a forest for more than 24 HOURS – before promising to get them all cheeseburgers — We want to know ‘where are the parents?’ and ‘why aren’t they in jail?’ 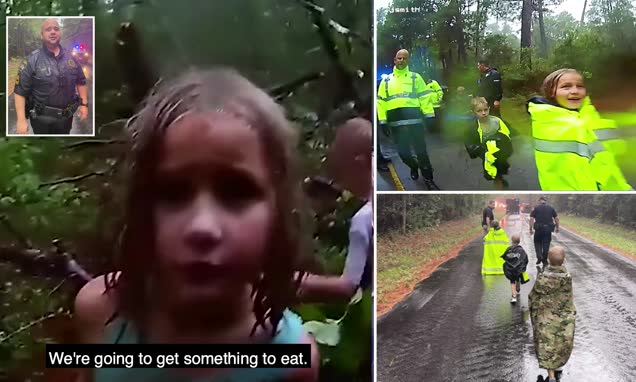 Montgomery County Sheriff’s Deputy Sgt. Jason Smith (inset) rescued three kids who were lost in the Sam Houston National Forest. The kids went missing Thursday after they wandered off the main trail to play in a dry creek. They got lost and took shelter under a fallen tree until a good Samaritan who had learned they were missing went searching the woods on Friday morning. Once the volunteer found the kids, he contacted authorities who then sent Sgt. Smith in to bring the group to safety. The children were reported missing Thursday night, prompting a multi-agency search effort. Police say a local man who was very familiar with the forest went searching for the kids Friday morning after learning they were missing. He found them around 9.30am in about a mile from where officials believe they entered the forest. He then called 911 and alerted authorities that he had found the children.