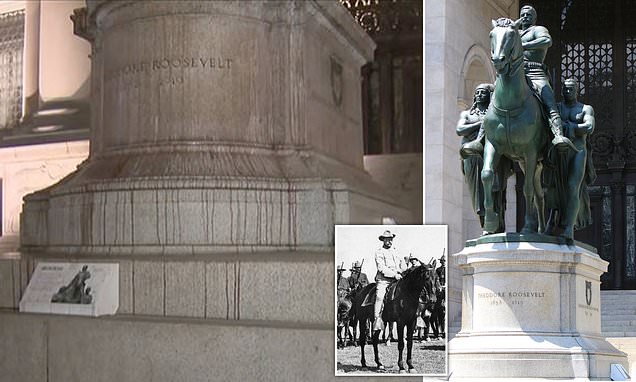 A controversial statue of former president Theodore Roosevelt at the entrance of Manhattan’s American Museum of Natural History was vandalized with red paint early on Wednesday.

Building security informed police a few minutes after midnight that two people – a woman and a man – had sprayed the base of the bronze statue with paint before running off southbound on Central Park West.

The NYPD said it was still investigating and that the suspects were unknown as of Thursday morning.

The incident came less than a week before Columbus Day, which has in years past drawn protests to the statue by activists calling for its removal, and more than four months after city officials confirmed it would be relocated.

Unveiled in 1940, the statue, sculpted by James Earl Fraser was intended to ‘celebrate Theodore Roosevelt as a devoted naturalist and author of works on natural history,’ the museum says on its website, and notes that Roosevelt’s father, Theodore Roosevelt Sr., was one of the museum’s founders.

The statue has long been criticized, however, for its depiction of Roosevelt on horseback alongside a black man and Native American, which critics have said signifies a racial hierarchy in which Roosevelt stands higher than the other two.

After years of protests, in June, 2020, amid the demonstrations over the murder of George Floyd, the city vowed to have the statue removed.