Ruins of Sodom and Gomorrah Found? Evidence Shows Destruction From ‘Fire And Brimstone’ 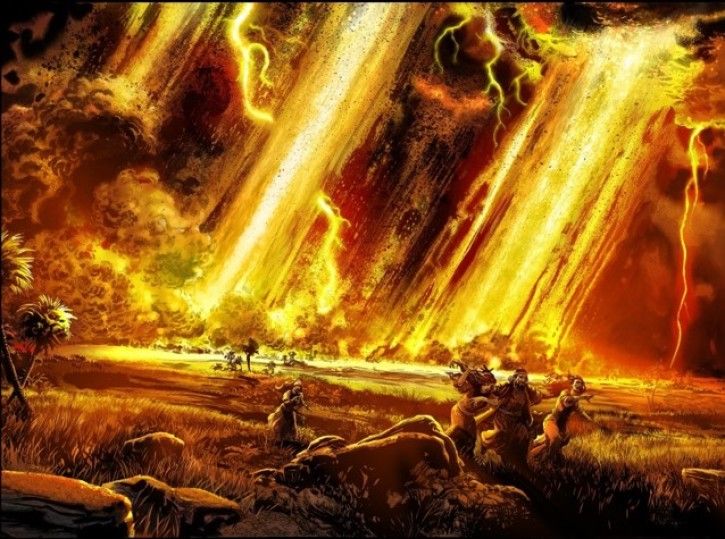 SANTA BARBARA, Calif. — The biblical “sin cities” of Sodom and Gomorrah were destroyed by a meteor “cloudburst” that incinerated all 8,000 inhabitants, according to new research. The giant space rock exploded over the town 3,650 years ago, creating a fireball. Scientists say the same event might also have given rise to the tale of Jericho’s walls “tumbling down,” as that city was just 20 miles away.

In the Bible, God was said to have been enraged by the wickedness of the inhabitants of Sodom and Gomorrah, raining “fire and brimstone” upon them. Now there seems to be hard evidence that a “heavenly event” really did happen around that time. The cosmic calamity laid waste to the Jordan River Valley’s northern shore, razing a huge 100-acre city to the ground. It also exterminated other cities and multiple small villages. There would have been no survivors.

The epicenter of Jordan is located at what is today known as Tall el-Hammam. An ancient palace was flattened, along with the perimeter walls and other structures. Detonation occurred about 2.5 miles above the ground. Even at that distance, the blast created a 740 mph shock wave. It would have leveled most of the buildings. None of the 8,000 residents would have survived the initial blast or the rock melting temperatures that followed.

Human remains suggested they had been blown up or incinerated, with extreme disarticulation and fragmentation of bones. “We saw evidence for temperatures greater than 2,000 degrees Celsius,” says study lead author Professor James Kennett of the University of California at Santa Barbara, in a statement.

An international team also found building materials and pottery shards melted into glass. Mud bricks had heat bubbles. These are all indications of unusually high temperatures, which would have occurred during the biblical account of the destruction of Sodom and Gomorrah. There was no man-made technology at the time that could have produced such astonishing damage.

“There is evidence of a large cosmic fireball, close to Tall el-Hammam,” says Prof. Kennett. He likens the extraordinary event to the 1908 Tunguska Event when a 12 megaton meteor destroyed 80 million trees across 830 square miles of eastern Siberia. It would have also been similar to the impact that did away with the dinosaurs but on a much smaller scale.

Further proof was provided by the identification of melted metals, including iron and silica, in samples of soil and sediments. The settlement had hosted early civilization for thousands of years. At the time it was ten and five times larger than Jerusalem and Jericho, respectively.

“I think one of the main discoveries is shocked quartz. These are sand grains containing cracks that form only under very high pressure. We have shocked quartz from this layer. That means there were incredible pressures involved to shock the quartz crystals. Quartz is one of the hardest minerals. It is very hard to shock,” explains Kennett.

The fireball also explains the unusually high concentrations of salt in the basement layer, which reached 25% in some samples. “The salt was thrown up due to the high impact pressures,” he adds.

The meteor is believed to have broken up upon contact with the Earth’s atmosphere. “And it may be [that] the impact partially hit the Dead Sea, which is rich in salt,” says Kennett. It redistributed salt-rich crystals from the local shores of the Dead Sea, wiping out other communities across the region. They may have included the biblical city of Jericho, which underwent violent destruction at the same time.

The high-salinity soil is believed to have triggered the “Late Bronze Age Gap” in which local cities were abandoned. Populations dropped from tens of thousands to maybe a few hundred nomads. Nothing could grow in these formerly fertile grounds, forcing people to leave the area for hundreds of years. Evidence for resettlement of Tall el-Hammam and nearby communities appears again in the Iron Age, roughly 600 years after the cities’ sudden devastation.

Tall el-Hamman has been the focus of an ongoing debate as to whether it could be the biblical city of Sodom. In the Old Testament’s Book of Genesis, Sodom and Gomorrah were destroyed by God for how wicked their inhabitants had become. One inhabitant, Lot, was saved by two angels who instructed him not to look behind as they fled. But Lot’s wife lingers and is turned into a pillar of salt. Meanwhile, fire and brimstone fall from the sky; multiple cities were destroyed; thick smoke rose from the fires; city inhabitants were killed and area crops were destroyed in what sounds like an eyewitness account of a cosmic impact event.

“All the observations stated in Genesis are consistent with a cosmic fireball. But there is no scientific proof this destroyed city is indeed the Sodom of the Old Testament,” says Kennett. The space rock hurtled through the atmosphere and exploded over the ancient city, he explained.

The researchers believe the disaster generated an oral tradition that inspired the written account in the Book of Genesis. It may also have led to the story of the burning of Jericho in the Old Testament’s Book of Joshua. “It is an incredibly culturally important area. It is where much early cultural complexity of humans developed,” adds Kennett.