A Brief Guide to the SBC Meltdown Over Sexual Abuse 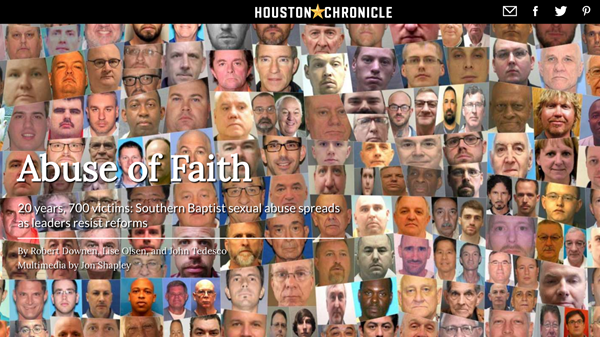 Sometime in the next few days, members of the Southern Baptist Convention’s Executive Committee will meet for the third time in three weeks — hoping to resolve a stalemate over the details of an investigation into the committee’s own handling of sexual abuse in the nation’s largest Protestant denomination.

The committee, which is charged with making decisions for the SBC between its annual meetings, has held several epic, hourslong meetings wrestling with how much access it will grant a third-party investigator to its previous communications about sexual abuse allegations. Their hesitation has invited accusations of a coverup, while their defenders say full transparency could result in lawsuits that would bankrupt the denomination.

But what is at stake, say some Southern Baptists, is the trust that holds the SBC together. The crisis has led pastors and seminary presidents alike — who are often reticent to criticize their fellow conservative leaders — to call for the committee to get its act together before it is too late.

A brief summary of how the SBC got here:

Why is the SBC only now coming to terms with sexual abuse?

Unlike the Roman Catholic Church or other denominations with a strong hierarchy, national leaders of the SBC have little control over what happens in local churches, including the hiring and firing of pastors and other staff. While SBC leaders have condemned abuse, they’ve long claimed that no direct denominational action is possible. For more than a decade, they have discussed compiling a database of accused sexual abusers for the use of local churches, but that database has never been established.

Some church leaders have also long claimed that abuse is not a problem in the SBC, calling their churches some of the safest places in the country, while others allege that sexual abuse victims and their advocates are creating a distraction for their own purposes.

Rank-and-file Southern Baptists had become increasingly uneasy about the denomination’s approach to sexual abuse issues, particularly after Paige Patterson, the president of a major seminary and a legend in the denomination, was fired for mishandling a sexual assault case at his school.

Then, in February 2019, an investigation by the Houston Chronicle reported on hundreds of cases of alleged sexual abuse by pastors and others at Southern Baptist churches. In some cases, the Chronicle’s investigation showed, pastors had moved from church to church, abusing both children and adults. Some churches had convicted sex offenders on staff.

Responding to the outcry that followed, then-Southern Baptist President J.D. Greear urged the Executive Committee to investigate several churches mentioned in the Chronicle’s report. He also recruited attorney and abuse survivor Rachael Denhollander, who had helped convict former USA Gymnastics team doctor Larry Nassar of abuse, to advise the SBC. Greear had previously announced plans —not long after his election in 2018 — to set up a group to study abuse in the SBC.

At that year’s annual meeting, Greear led a service of lament for what they now called a crisis of abuse. The delegates to the meeting, known as messengers, also voted to change the denomination’s bylaws to allow Southern Baptists to expel churches that mishandled abuse.

In October 2019, Russell Moore, who then headed the SBC’s Ethics and Religious Liberty Commission, held a conference called Caring Well, dedicated to the issue of sexual abuse, at which Denhollander accused SBC leaders of mishandling the case of abuse survivor Jennifer Lyell. Moore himself accused leaders — especially staff and board members of the Executive Committee — of mistreating survivors.

That was two years ago.

Yes, but last year’s annual meeting was canceled due to the pandemic, preventing sexual abuse advocates from forcing the issue. But as this year’s June annual meeting approached, Moore resigned his SBC post and in a leaked letter accused SBC leadership of making his life miserable, largely for his advocacy against sexual abuse.

When they arrived at the annual meeting in Nashville, Southern Baptists were fed up. More than 18,000 of them showed up determined to hold the Executive Committee accountable. They voted overwhelmingly to set up an investigation into how the Executive Committee handled allegations of abuse and whether abuse survivors had been mistreated.

The Executive Committee tried to head that off by setting up its own investigation, but the messengers were having none of it. They overruled the chair of the meeting and passed a motion to set up a task force to oversee an independent investigation. Most controversially, the motion ordered the Executive Committee to be completely transparent by waiving attorney-client privilege if asked to do so.

What is attorney-client privilege?

When lawyers and their clients confer on legal matters, their discussions are considered confidential, and therefore their communications can be shielded in any investigation. Clients may, however, consent to a waiver of this privilege, giving lawyers permission to reveal confidential information.

Not that we know of. The allegations have mostly been about dismissing the needs of abuse survivors and refusing to counter the problem on a national basis.

So what’s the problem?

Ronnie Floyd, president and CEO of the Executive Committee, balked at waiving privilege, as did many long-time committee members, claiming that waiving privilege, by opening the door to costly lawsuits, would violate their duty to protect the SBC’s assets. They have refused to include a blanket waiver in the contract with Guidepost, suggesting instead that access to information can be negotiated. In two grueling committee meetings — one in person, one online — members became deadlocked over the contents of the contract.

The chair of the task force, a North Carolina pastor named Bruce Frank, along with his fellow task force members, have pushed back, demanding a waiver and backing up their demand with legal analysis claiming that a refusal to waive attorney-client privilege is riskier legally.

So that’s it? It’s over one clause in a contract?

No, the fight has ramifications for the governance of the SBC itself. The ultimate power in the convention traditionally rests with its constituent churches, not its denominational leaders. Those churches express their will through the votes of the messengers at annual meetings.

At least one Executive Committee member has scoffed at the idea that the group has to follow the lead of the messengers. “15,000 people don’t have the power to tell us to do anything,” said Joe Knott, a North Carolina attorney and committee member, referring to the messengers at the last SBC meeting.

The refusal by the Executive Committee to follow the will of the messengers could lead to a crisis in the denomination, several prominent members say. Floyd himself wrote in 2020 that “if we ever invert this order in our mindset and practice, then we will begin a downhill slide that may become irreversible.”

What does that mean in practice?

The SBC relies on its Cooperative Program — a voluntary sharing of hundreds of millions in donations — to fund its national and international work and structures. If the Executive Committee defies the will of local churches, they could stop sharing their funds, disempowering the national leadership and ultimately possibly dissolving the denomination itself.