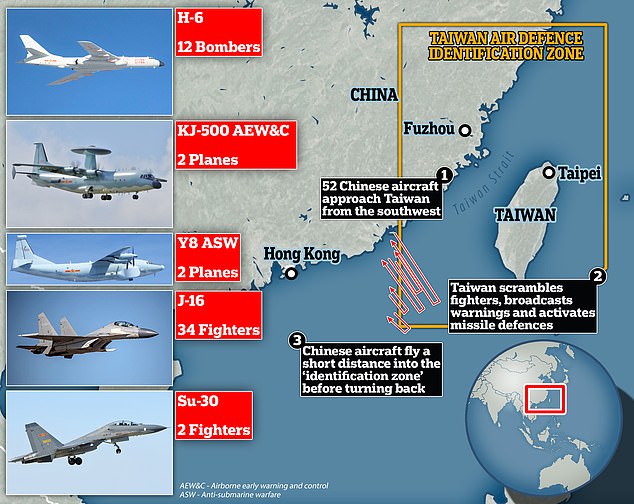 China has warned Taiwan against ‘playing with fire’ and said that ‘war may be triggered at any time’ after it sent dozens of warplanes into the island’s airspace.

An article in the state-backed Global Times said that ‘collusion’ between the US and Taiwan was so ‘audacious’ that the situation ‘has almost lost any room for manoeuvre, teetering on the edge of a face-off.’

Nearly 150 Chinese warplanes have breached Taiwan’s airspace since Friday, including 56 jets on Monday in a dramatic increase in aggression.

Taiwanese president Tsai Ing-wen today vowed to ‘do whatever it takes’ to guard Taiwan against invasion as she indicated that without help from the country’s allies ‘authoritarianism has the upper hand over democracy.’

Recent voyages through the Strait of Taiwan by the British and American navies, coupled with the new Aukus defence pact have infuriated Beijing and sparked more shows of strength in the South China Sea.