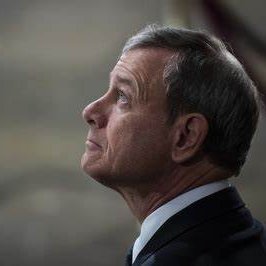 On Sunday, Chief Justice John G. Roberts Jr. was the sole member of the Supreme Court to join hundreds of other Washingtonians at Cathedral of St. Matthew the Apostle for the Red Mass, a ceremony typically held on the Sunday before the first Monday in October, the opening of the high court’s term. The purpose of the ritual, which at the Washington cathedral dates to 1953, is to “invoke God’s blessings on those responsible for the administration of justice as well as on all public officials,” according to the event’s program.

The Supreme Court may need those blessings. On Monday, the justices will return to the courtroom for their first in-person session of oral arguments since the start of the pandemic. Their docket is explosive, to put it mildly: One case, Dobbs v. Jackson Women’s Health Organization, will ask the court to overrule Roe v. Wade to preserve a Mississippi law banning most abortions after 15 weeks of pregnancy. Another case, backed by the National Rifle Association, is challenging a New York law that limits gun usage by requiring law-abiding citizens who want a permit to carry a concealed firearm outside their home to demonstrate a “proper cause.”

[In political spotlight, Supreme Court embarks on extraordinarily controversial term]
On top of the consequential docket, the court is mired in other volatility: In recent weeks, justices have been delivering public speeches against accusations of partisanship. (Justice Samuel A. Alito Jr., nominated by President George W. Bush, said media and political commentary on the court’s emergency decision docket makes it seem like a “dangerous cabal” is making decisions outside the normal process.) A presidential commission is weighing proposals to change lifetime tenure for justices and even expand the number of seats on the bench. Justice Stephen G. Breyer, who is an 83-year-old Bill Clinton appointee, is facing pressure to step down so President Biden can replace him with another liberal who is younger.