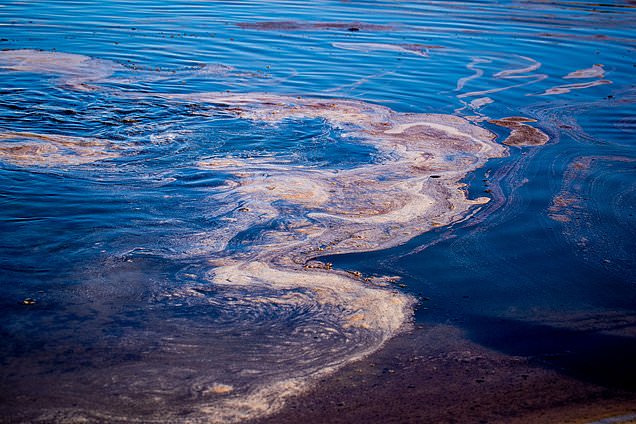 The CEO of an energy firm whose pipeline leaked 126,000 gallons of oil onto the California coast says the spillage has stopped, with his company’s share price plunging by more than 50 per cent on Monday amid fury over the environmental catastrophe.

Martyn Willsher, who oversees the operations of Houston-based oil company Amplify Energy Corp., said Sunday that his company’s 17½-mile underwater pipeline that sprung the leak had been ‘suctioned at both ends’ over the weekend, so that no more oil would spill out into the already contaminated Pacific, and shores of a 13 mile stretch of coastline encompassing Huntington Beach as well as Newport Beach.

The oil it did leak – equivalent to 3,000 barrels – represented the entire capacity of the pipeline. On Monday morning, Amplify’s shares plunged by 50.43 per cent, from $5.75 per share to $2.85 a share as stock markets opened.

Investors are no doubt spooked by the prospect of lawsuits, with Huntington Beach Mayor Kim Carr vowing to hold the oil firm ‘accountable.’ The spillage – believed to have begun on Friday – canceled the second day of the popular Pacific Air Show, which attracted more than one million visitors on Saturday, with local businesses also likely to make claims for compensation.

Willsher added that the company is investigating the spill and that divers were at a potential source site of the leak, asserting that the pipeline – built in the late 70s and early 80s – has had undergone maintenance and has been ‘meticulously maintained’ every year since, even during the COVID pandemic.

‘Everything is shut down,’ Willsher said. ‘Our employees live and work in these communities, and we’re all deeply impacted and concerned about the impact,’ the executive added.

‘We will do everything in our power to ensure that this is recovered as quickly as possible.’

The pipeline is operated by Beta, a Long Beach-based offshoot of Amplify. It sat 80 feet to 100 feet below the surface, and was linked to three offshore platforms.