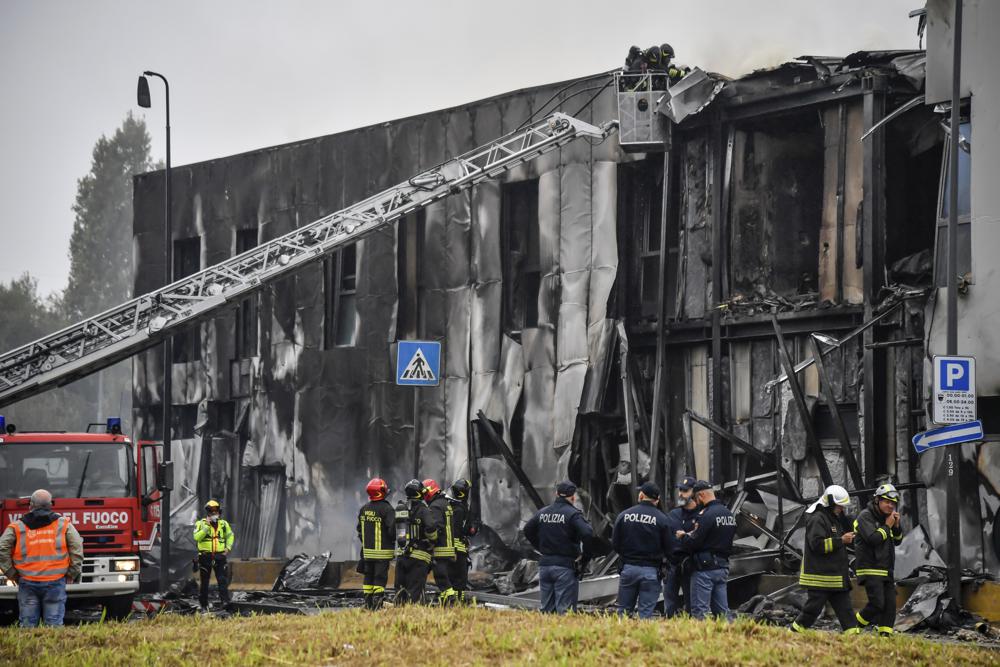 ROME (AP) — A small, single-engine plane carrying six passengers and a crew of two crashed Sunday into a vacant two-story office building in a Milan suburb, and authorities said all eight people aboard died.

Investigators opened a probe into what caused the private plane to crash shortly after takeoff from Milan’s Linate Airport en route to Olbia Airport on the Italian island of Sardinia. A thick column of dark smoke rose from the crash site and was visible for kilometers. Several parked cars nearby went up in flames.

Firefighters tweeted that no one else but those on board involved in the early afternoon crash near a subway station in San Donato Milanese, a small town near Milan.

Milan Prosecutor Tiziana Siciliano told reporters at the scene that the plane was proceeding on its flight until “a certain point, then an anomaly appeared on the radar screen and it plunged,” striking the building’s roof.

Control tower officials reported the anomaly, she said, but further details on that weren’t immediately given.

The prosecutor said the plane didn’t send out any alarm. It was too early to cite any possible cause for the crash, Siciliano said, adding that the flight recorder has been retrieved.

By early evening, only two of the eight dead had been identified, since they carried documents on them, Siciliano said. Those aboard were “all foreigners,” she said, including the pilot, who was Romanian. The aircraft was registered in Romania, she added.

Italian news reports said the pilot, 30, also had German citizenship. The second person identified was a Romanian woman in her 60s who also held French citizenship, the reports said.

The reports said the aircraft had flown from Bucharest, Romania, to Milan on Sept. 30 with no apparent problem.

The Italian news agency ANSA quoted the national air safety agency ANSV as saying “the plane hit the building and started burning.” It said the aircraft was a PC-12, a single-engine, executive-type plane.

Fire officials said earlier that the aircraft had crashed into the building’s facade. But following further inspection, the prosecutor said it was apparent that the plane had struck the roof.

Firefighters extinguished the flames at the badly charred and gutted building, which reportedly was under renovation.