Kansas City private school is embroiled in racism storm after white boy asked white girl to homecoming with sign saying: ‘If I were black, I would be picking cotton, but I’m white so I’m picking you’ 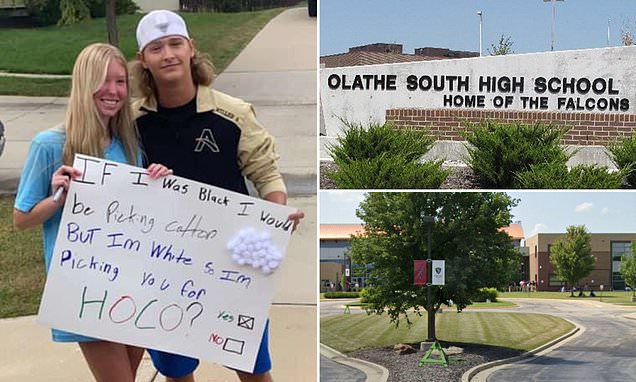 A Kansas City private school has been embroiled in a racism storm after a student issued a racist homecoming date invite. It saw the unnamed boy ask his prospective date – both of whom are white – ‘If I were black, I would be picking cotton, but I’m white so I’m picking you for Hoco?’ The girl, who has not been named, crossed off the ‘Yes,’ box, and was filmed smiling next to her date on camera (main photo). One of the students attends the private St James’ Catholic Academy in the city (bottom right), with the other at Olathe South High School (top right), although it remains unclear which teen attends which school, and where the homecoming dance was being held.