Holy innocent – or did she do a deal with the Devil? New film examines life of televangelist Jim Bakker’s wife Tammy Faye Bakker who revelled in excess – until her husband was brought down by a sex and fraud scandal 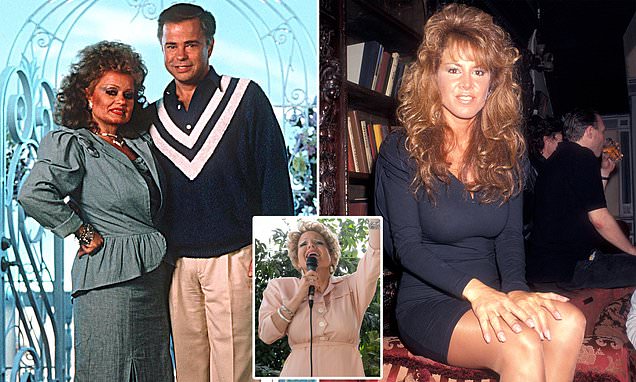 During their glory days serving the Lord back in the 1980s, America’s most popular ‘televangelists’ Jim and Tammy Bakker (pictured left) didn’t let old-fashioned Christian virtues like modesty and thrift get in their way. Ultimately, however, it was the Bakkers’ sins of excess that would come to define them as their empire came crashing down in a frenzy of headlines about sex, drugs and fraud. Jim Bakker was first defrocked for paying off a church secretary (pictured right, Jessica Hahn) who claimed he’d raped her and for being exposed as a closet bisexual, and then jailed for fraud. How much did Tammy, who divorced Jim while he was in prison, and who died of colon cancer aged 65 in 2007, really know about what was going on? Surely there was more to her than the TV image as the earnest, sweet-natured but ultimately fluffy and shallow singer and presenter – perpetually weeping tears of Christian compassion but so vain she had her eyebrows, eyeliner and lipliner tattooed on her face? Now Hollywood is tackling that question in The Eyes Of Tammy Faye, a film with Jessica Chastain as Tammy (inset) and Anglo-American actor Andrew Garfield as Jim.