PIERS MORGAN: The sight of US border horsemen charging into Haitian migrants is shocking – but it’s despicable for Biden to pass the blame to the men and women put in the impossible position of controlling a human tide that HE created 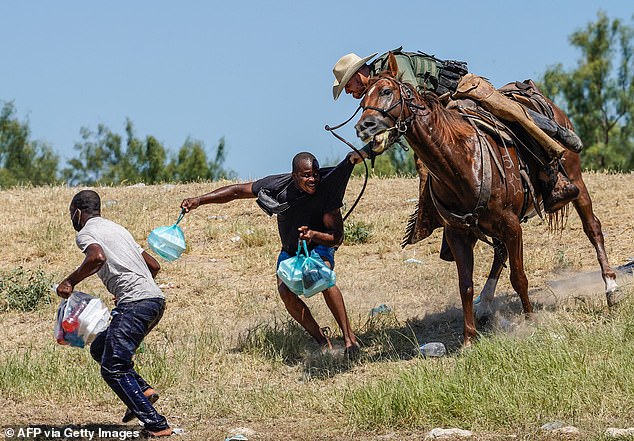 It’s a truly shocking, gut-wrenching photograph: a furious mounted US Border Patrol agent on horseback wrestling with a desperate Haitian migrant trying to get into an encampment on the banks of the Rio Grande in Del Rio, Texas.

The white agent is wielding his horse’s long reins in an aggressive way that some believe was akin to whipping the black migrant, conjuring vile memories of the horrific days of American slavery.

But the agents involved later angrily denied this, saying that anyone with ‘two brain cells’ would know they were using their split reins to control their horses in the melee.

Either way, it’s a deeply distressing snapshot of a major new immigration crisis on the southern border.

And nobody was more appalled than President Biden whose press secretary Jen Psaki described the footage as ‘horrific’, ‘horrible’ and ‘devastating to watch’.

The migrant, clutching plastic bags of food, is one of many thousands of refugees who’ve sought asylum in America since Haiti was thrown into turmoil by the assassination of its president, Jovenel Moïse, in July, and a massive earthquake that followed in August.