Volcano erupts on Spanish island La Palma and rescuers scramble to evacuate more than 5,000 residents as plumes of smoke billow out of La Cumbre Vieja 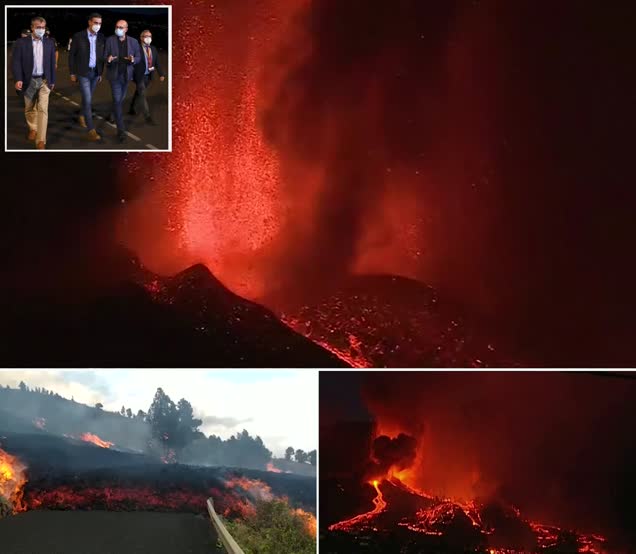 A volcano on the Spanish island of La Palma erupted Sunday after a week long build-up of seismic activity, forcing the authorities to scramble evacuations for more than 5,000 people as lava ran towards their homes.

The explosion took place in an area known as Cabeza de Vaca on the western slope of the volcanic ridge as it descends to the coast, and comes after the island registered up to 1,000 earthquakes in the past five days alone.

Huge red plumes topped with black-and-white smoke shot out along the volcanic ridge that scientists had been closely following due to the accumulation of molten lava below the surface.

Mayor Sergio Rodríguez said 300 people in immediate danger had been evacuated from their homes and sent to the El Paso soccer field as one lava river slid towards the village, while rescue services carried out evacuations of those with mobility issues hours before the eruption.

The volcanic eruption alert has gone from yellow traffic light to red according to the Civil Guard, as the evacuation affects more than 5,000 people from different districts in the municipalities of El Paso, Tazacorte and Los Llanos de Aridane.

Roads were closed due to the explosion and authorities urged the curious not to approach the area.