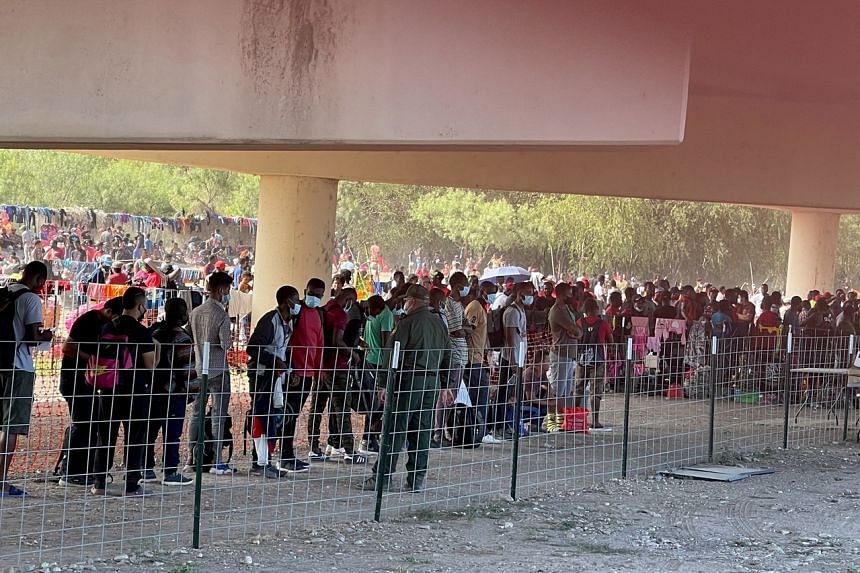 More than 10,000 mostly Haitian migrants were bivouacked in a squalid camp under a bridge in southern Texas on Friday, even as hundreds more headed toward the border in a growing humanitarian and political challenge for U.S. President Joe Biden.

The Haitians were joined by Cubans, Venezuelans and Nicaraguans under the Del Rio International Bridge across the Rio Grande connecting Ciudad Acuña in Mexico to Del Rio, Texas. They slept under light blankets, while a few pitched small tents.

Officials on both sides of the U.S.-Mexico border said the majority of the migrants were Haitians and more are expected to arrive. Most of the people Reuters spoke with had not come direct from Haiti but had made long and harrowing journeys through Mexico and Central and South America.

Several told Reuters they followed routes shared amongst each other on WhatsApp.

In Ciudad Acuña, two workers at the main bus terminal said at least two dozen buses full of Haitians had arrived on Friday, with one putting the estimate of individual arrivals at around 1,100. A Mexican official said the number of migrants was around 12,000 on Friday afternoon.

Ali Sajous, 29, a Haitian migrant, said U.S. officials were handing out numbers for immigration processing and she, her husband and two-year-old daughter who arrived Monday were No. 910 in the families line. Authorities were processing No. 685 at the time, she said.

The U.S. authorities plan to put the Haitians in Del Rio on flights back to Haiti under a public health law known as Title 42, the Wall Street Journal reported, citing Lewis G. Owens, a judge in Val Verde County, and an anonymous Biden administration official.

Haiti, the poorest nation in the Western Hemisphere, has a troubled history. In July, the president was assassinated, and in August a major earthquake and powerful storm hit the country.

Many of the Haitians interviewed by Reuters said they used to live in South America, often Brazil or Chile, and were headed north now because they could not attain legal status or struggled to secure decent jobs. Some Haitians also said they were encouraged by videos on social media about applying for asylum in the United States.

A Mexican official, speaking on condition of anonymity, said some 500 mostly Haitian migrants took buses on Friday bound for the border city of Reynosa, east of Del Rio and opposite McAllen, Texas. Hundreds of Haitians were already at a border bridge there.

Later on Friday, Mexican news outlet Aristegiu Noticias said migration officials had taken some 400 migrants off the buses in the town of San Fernando. The migrants, who included pregnant women, children and elderly, planned to walk some 150 kilometers (93 miles) to Reynosa, the report said.

Mexico’s National Institute of Migration (NIM) did not immediately respond to a request for comment.