In Light of a Rally That Is Touted as an Effort to Express Solidarity With People Arrested for Their Alleged Roles in the Jan. 6 Insurrection at the U.S. Capitol, Churches, Especially Black Churches, Ask for Extra Police Protection 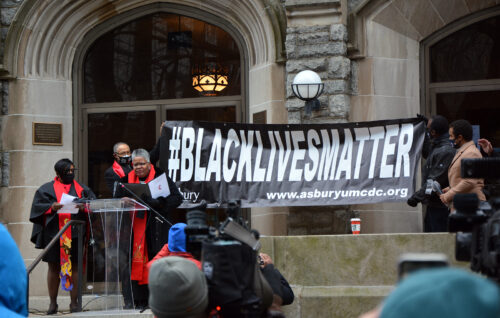 WASHINGTON (RNS) — Houses of worship in the nation’s capital will receive additional police protection ahead of a right-wing rally this weekend after members of the militant group Proud Boys destroyed and burned church banners in December 2020.

In a letter sent to Washington Metropolitan Police officials on Thursday (Sept. 16), Asbury Methodist Church’s pastor, the Rev. Ianther M. Mills, and church board chair Canardo M. Richardson expressed concern after hearing of reports of an internal Capitol police memo warning that this weekend’s “Justice for January 6” rally may pose a threat to Jewish centers and liberal churches.

The rally is touted as an effort to express solidarity with people arrested for their alleged roles in the Jan. 6 insurrection at the U.S. Capitol.

After an organized protest against the election of President Joe Biden on Dec. 12, several Proud Boys tore down a Black Lives Matter sign that was displayed outside Asbury. The group’s leader, Enrique Tarrio, was eventually arrested and sentenced to 5 months in jail for his role in the sign destruction, as well as charges related to weapons possession. Proud Boys members have also been charged for participating in the insurrection.

In Asbury’s letter, which was shared with the media by officials affiliated with Washington’s Downtown Cluster of Congregations, church leaders said their staff had received harassing emails since Tarrio’s sentencing.

“Together these conditions indicate not only that the Asbury United Methodist Church physical property may be in jeopardy of serious vandalism during the upcoming Justice for J6 Rally, but also that our staff and membership are in jeopardy of harassment and harm,” the church’s leadership wrote.

They asked police to provide a plan to protect their church “as well as other targeted downtown churches.”

A spokesperson for District of Columbia police confirmed to Religion News Service that law enforcement plans to pay “special attention” to the church on Saturday.

Terry Lynch, executive director of the Downtown Cluster of Congregations in Washington, said police have agreed to provide security to other churches in the area including Metropolitan AME, another historic Black church whose Black Lives Matter sign was torn down in December.

“The Downtown Cluster of Congregations and its members have asked for and appreciate MPD presence at its congregations,” Lynch said in a statement. “Minorities — African American, Asian as well as others have suffered tragic hate crimes at unprecedented levels this past year. We are working to make tomorrow safe for all and not suffer what we saw on Jan 6th and at the MAGA events. Indeed, together we shall overcome hate and violence.”

It’s at least the second time this year police have bumped up security for Asbury and nearby houses of worship. Officers were stationed outside the church and other downtown religious communities on Jan. 6, when faith leaders expressed concerns to the city about the presence of right-wing groups.

Even so, a group of clergy who were gathered in prayer around a Black Lives Matter sign in front of a Lutheran church were harassed by Trump supporters as they walked down to attend his rally that day. 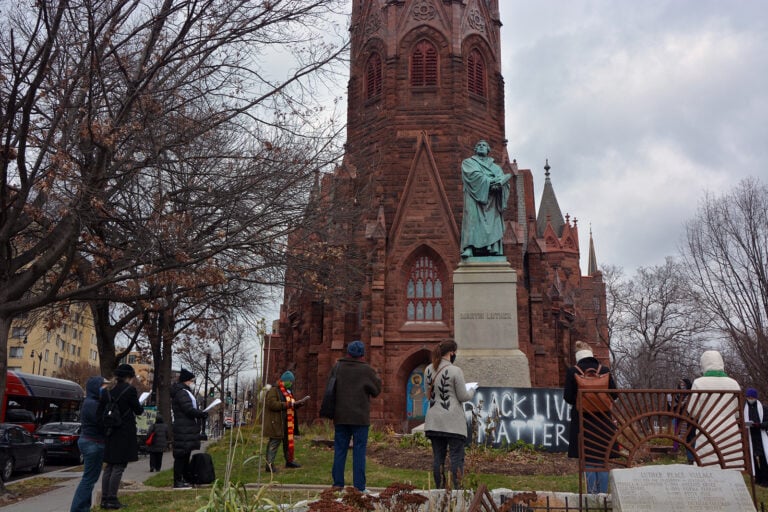 Hate group watchers have said they doubt that the weekend’s rally will draw anything close to the numbers seen on Jan. 6. Many right-wing leaders are dissuading followers from attending due to concerns about heavy law enforcement presence, and FBI Deputy Director Paul Abbate said earlier this week that his agency has not seen specific credible threats regarding potential violence.

But organizers may have gotten a boost on Thursday when former President Donald Trump appeared to express solidarity with the rallygoers.

“Our hearts and minds are with the people being persecuted so unfairly relating to the January 6th protest concerning the Rigged Presidential Election,” he said in a statement, referring to widely discredited allegations about the accuracy of the 2020 election.

“In addition to everything else, it has proven conclusively that we are a two-tiered system of justice. In the end, however, JUSTICE WILL PREVAIL!”

Local enforcement is to be on high alert ahead of the rally, and fences have been re-erected around the U.S. Capitol.