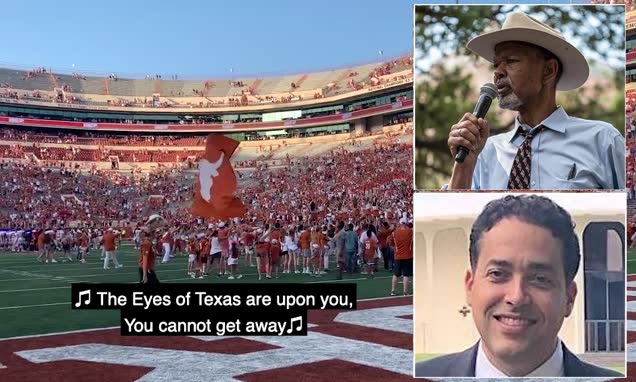 A group of University of Texas students are suing the school for creating a ‘hostile environment’ by forcing members of its marching band to play in a separate band because they refuse to play the school’s spirit song, ‘The Eyes of Texas’, at football games. ‘The Eyes of Texas’ was first sung in 1903 at a student-organized minstrel show, a popular form of entertainment in the early 20th century that featured white performers in blackface, in downtown Austin. It’s been a source of campus-wide debate for more than a year after a summer of Black Lives Matter protests amid the killing of George Floyd – but the university stood by the song in a recent report affirming that it had ‘no racist intent’ and that it ‘remains our alma mater.’ Top right inset: Texas NAACP President Gary Bledsoe at a rally in the state Capitol in June. Bottom right: History professor Albert Martinez who released his own report saying that then-President Prather was indeed inspired by Robert E. Lee when he said, ‘the eyes of Texas are upon you’.