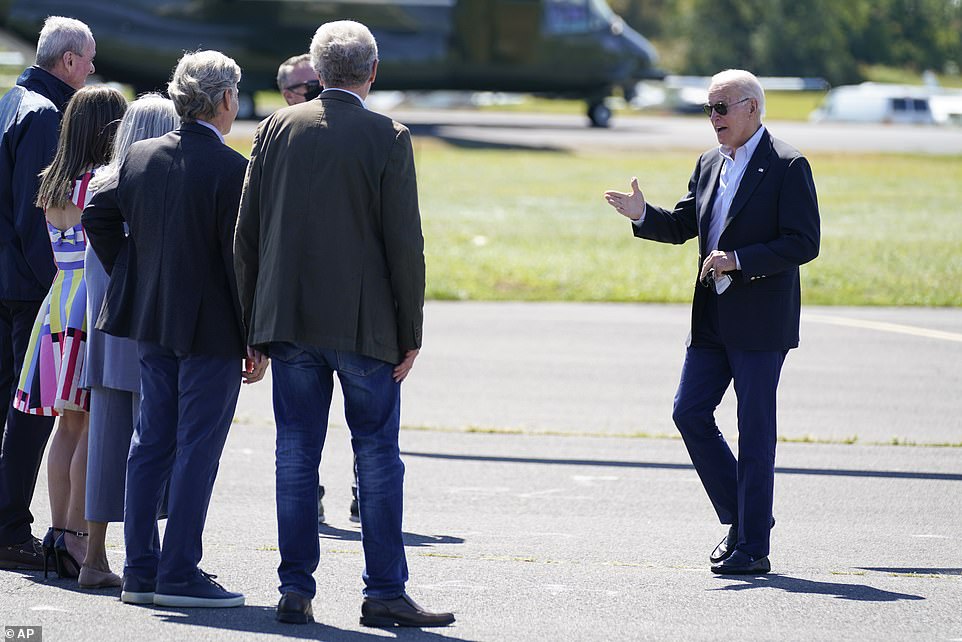 President Joe Biden visited New York and New Jersey on Tuesday to view flood damage from Hurricane Ida that killed 52 in the Northeast – and had to endure angry hecklers as he sought to provide comfort to suffering families.

Biden also warned that the nation was now experiencing extreme weather in ‘real time’ and once again pitched his infrastructure plan as a way to rebuild, saying scientists are warning ‘this is code red.’

Biden met with state and local leaders and planning to tour devastation in the area, just days after the visiting storm-ravaged neighborhoods near New Orleans and on the Louisiana Gulf coast.

There were signs of the political obstacles he faces even amid a disaster visit where he tried to make a unifying statement that ‘we’re in this together.’

After landing at John F. Kennedy airport in Queens, Biden was met by jeers and profane signs from a group of angry Trump supporters as his motorcade rolled through New Jersey

One red, white and blue flag said “F*** Biden’ with a sub-heading that read: ‘And F*** You for voting For Him.’ A school-age boy at a protest along the route was photographed from the motorcade giving the president the finger – just as a line worker in a yellow vest did in Louisiana Friday.

Biden toured flood damage in the Manville, New Jersey neighborhood of Lost Valley, but couldn’t escape hecklers there, either.

A man with a Trump flag and a woman could be heard yelling while Biden and politicians met with area victims. ‘It’s a shame … Despicable!’ one yelled.

‘Resign, you tyrant!’ yelled a heckler.

‘We will leave you guys behind!’ yelled one person, in an apparent slap at the Afghanistan pullout.

One man on a property with a Trump flag hanging outside yelled out: ‘Hey Newsmax, can we year you? OAN,’ naming two conservative pro-Trump networks.

The angry attacks were captured on C-Span video of the event.

It was a jarring contrast to the images of healing and assistance the White House sought to project by scheduling a tour of homes, some of which were obliterated by the remnants of Hurricane Ida.

One woman who spoke to Biden said her family only avoided flood damage and an eventual explosion thought to be connected to a gas leak after a neighbor called with a warning, since she and her husband have a four-month old baby.

‘We only left early just because we had a baby,’ the woman said, after Biden connected her with traveling reporters who had yelled out a question.

‘Thank God you’re safe. Help you rebuild and figure this out,’ Biden added.

Earlier, Biden spoke about extreme weather and the risks posed by climate change.

‘We can’t turn it back very much, but we can prevent it from getting worse,’ he said, referencing actions to deal with climate change.