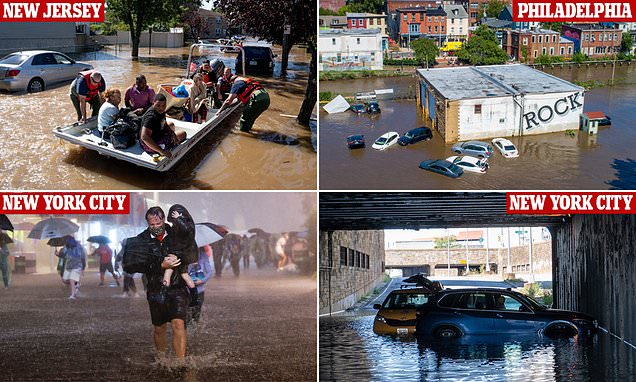 Flash flooding caused by the remnants of Hurricane Ida killed at least 45 people in the Northeast, including 23 in New Jersey alone and 12 in New York City as cleanup is underway from the ‘historic’ weather event that officials blamed on climate change.

The New York Police Department said that out of 12 people who died in the city, one of them perished in a car and 11 in flooded basement apartments that often serve as relatively affordable homes in one of the nation´s most expensive housing markets. The victims ranged from the ages of 2 to 86.

Five people died in Pennsylvania; one in Maryland; and one in Connecticut.

‘Among the people MOST at risk during flash floods here are those living in off-the-books basement dwellings that don’t meet the safety codes necessary to save lives,’ lawmaker Alexandria Ocasio-Cortez tweeted.

‘These are working class, immigrant, and low-income people & families,’ she added.

Three also died in the New York suburb of Westchester while another three died in Montgomery County outside Philadelphia in Pennsylvania, a local official confirmed.