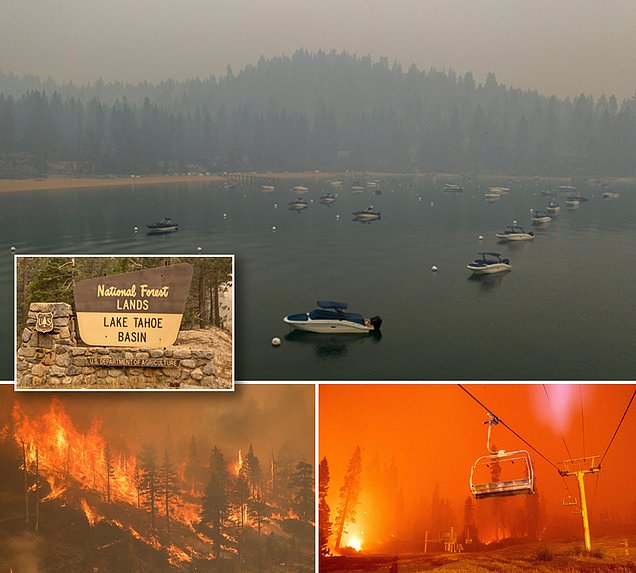 More evacuations have been ordered around the Tahoe Basin Sunday evening, as fire officials race to contain the massive Caldor Fire encroached on the California mountain resort town.

On Sunday, the entire city of South Lake Tahoe was placed under an evacuation warning, with residents needing to be ready to leave on a moment’s notice.

Crews dealt with a two-week old blaze they said was ‘more aggressive than anticipated,’ and continued to edge toward the pristine waters of Lake Tahoe.

‘Today’s been a rough day and there’s no bones about it,’ said Jeff Marsoleis, forest supervisor for El Dorado National Forest.

A few days ago, he thought crews could halt the Caldor Fire’s eastern progress, but he said: ‘today it let loose.’

Flames churned through mountains just a few miles southwest of the Tahoe Basin, where thick smoke sent tourists packing at a time when summer vacations would usually be in full swing ahead of the Labor Day weekend.

‘To put it in perspective, we’ve been seeing about a half-mile of movement on the fire’s perimeter each day for the last couple of weeks, and today, this has already moved at 2.5 miles on us, with no sign that it’s starting to slow down,’ said Cal Fire Division Chief Eric Schwab.

Some areas of the Northern California terrain are so rugged that crews had to carry fire hoses by hand from Highway 50 as they sought to douse spot fires caused by erratic winds.

The forecast did not offer optimism: triple-digit temperatures were possible and the extreme heat was expected to last several days. A red flag warning for critical fire conditions was issued for Monday and Tuesday across the Northern Sierra.