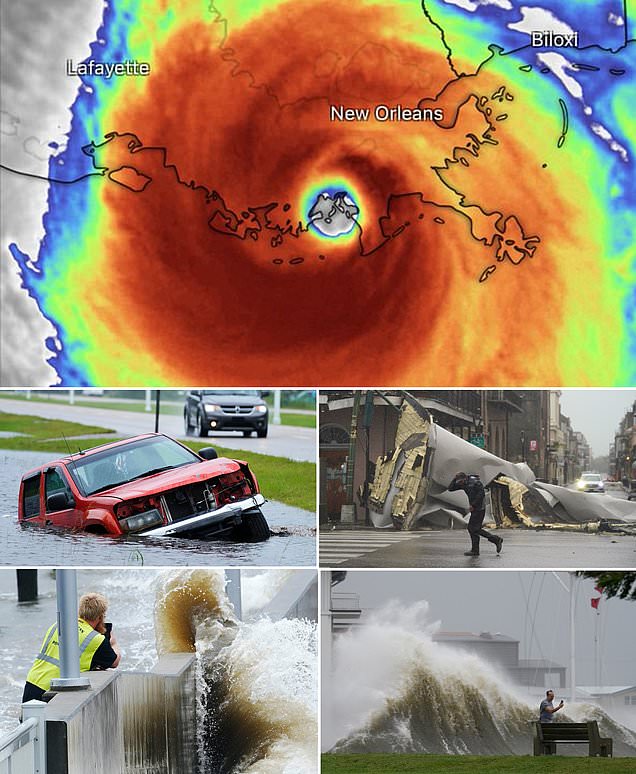 Hurricane Ida has hit Louisiana on the 16th anniversary of Katrina with a 17 mile-wide eye, 150mph winds and 16 foot storm surges that experts fear could overwhelm levees and other flood defenses.

Ida made landfall in Port Fouchon on the Louisiana coast at 1:02pm EST Sunday, as an ‘extremely dangerous’ category four hurricane. Its windspeed sat just 7mph short of a category five hurricane, with the weather event predicted to be one of the most severe ever to hit the southern state.

The hurricane’s eye is 17 miles in diameter, with the extreme weather event also set to bring flash floods, thunder, lightning, storm surges and tornados to areas in or close to its path. An estimated 300,000 homes have so-far been left without power. There have not been any reports of injuries or deaths, although some of those ordered to evacuate have vowed to stay home and take their chances.

Wind gusts of up to 180mph are expected close to shore, with the National Hurricane Service warning of ‘catastrophic damage’ to anything in their path.

Ida is also forecast to bring ‘extremely life-threatening’ storm surges of up to 16 feet of water, with the region stretching from Burns Point in Louisiana to Ocean Springs, Mississippi, most at risk of inundation.

New Orleans is not forecast to see high surges, amid worries flood water could overcome the city’s levees and other flood defenses, which were bolstered in the wake of Katrina.

But the Big Easy has been warned to expect between 15 and 20 inches of rainfall. Forecasters fear such a downpour could cause widespread flash floods, as the city’s pumping system struggles to cope.

On Sunday, Louisiana Gov. John Bel Edwards said he expects Ida to be ‘a big challenge for us.’

While speaking with CNN’s Jake Tapper on ‘State of the Union,’ Edwards said Louisiana ‘is as ready as we can be,’ but he expects Ida to be ‘a very serious test of our levy systems, especially in our coastal Louisiana.’

After the failure of Katrina in 2005, the state invested in shoring up the levy system. The governor said Ida ‘will be the most severe test,’ but he expects the levees to hold. ‘

The next 24, 36 hours are just going to be very, very critical for us here in,’ Edwards said.

In addition, Edwards compared Ida to be similar in strength to 2020’s Hurricane Laura at landfall.

Laura had been Louisiana’s strongest-measured hurricane since 1856.

‘Your window of time is closing. It is rapidly closing. By the time you go to bed tonight, you need to be where you intend to ride this storm out and you need to be as prepared as you can be,’ said Edwards.

The number of Louisiana National Guardsmen in place was around 400, and will rise to around 5,000 in the coming days, Edwards said.

Edwards added that 10,000 electrical linemen were also stationed around Louisiana, with another 10,000 contracted on a needed basis.

When speaking to Wolf Blitzer, Dr. Katherine O’Neal, chief medical officer or Our Lady of the Lake Regional Medical Center in Baton Rouge, said her hospital is ready to sustain Ida, but will be stretched thin due to a spike in Covid-19 patients.