Forecasters said Ida could make a U.S. landfall on Sunday as an “extremely dangerous” Category 4 storm on the five-step Saffir-Simpson scale, generating winds of 140 miles per hour (225 kph), heavy downpours and a tidal surge that could plunge much of the Louisiana shoreline under several feet of water.

On Saturday afternoon Ida was about 240 miles (386 km) southeast of the mouth of the Mississippi River, packing top winds of 105 miles per hour (169 kph) and aiming for the Louisiana coast, the National Hurricane Center said.

Flooding from Ida’s storm surge – high water driven by the hurricane’s winds – could reach between 10 and 15 feet (3 and 4.5 meters) around the mouth of the Mississippi River, with lower levels extending east along the adjacent coastlines of Mississippi and Alabama, the NHC said.

Officials ordered widespread evacuations of low-lying and coastal areas, jamming highways and leading some gasoline stations to run dry as residents and vacationers fled the seashore.

“I left Fourchon last night at 8 o’clock and it’s a ghost town,” said Andre LeBlanc, a sportfishing captain speaking from his inland home in Lafayette, Louisiana. “We were some of the last to get out of there.”

Utilities were bringing in extra crews and equipment to deal with expected power losses. Hundreds of thousands of homes could fall dark as Ida’s strong winds carry well into Louisiana and as far east at Mobile, Alabama, said DTN’s Foerster.

Biden on Saturday said 500 federal emergency response workers were in Texas and Louisiana to respond to the storm. Aid workers have “closely coordinated with the electric utilities to restore power as soon as possible,” Biden said at a briefing with Federal Emergency Management Agency officials. read more

Louisiana Governor John Bel Edwards, whose state is already reeling from a public health crisis stemming from a fourth wave of the COVID-19 pandemic, said Ida’s winds will be fierce and spread across a 300-mile area.

“We have a very serious situation on our hands,” Edwards said at a briefing. “This will be one of the strongest hurricanes to hit anywhere in the state of Louisiana since at least the 1850s.”

The state is not planning to evacuate hospitals now strained by an influx of COVID-19 patients, he said. There were more than 3,400 new infections reported on Friday, and about 2,700 people are hospitalized with the virus.

“We have been talking to hospitals to make sure that their generators are working, that they have way more water on hand than normal, that they have PPE on hand,” Edwards said. 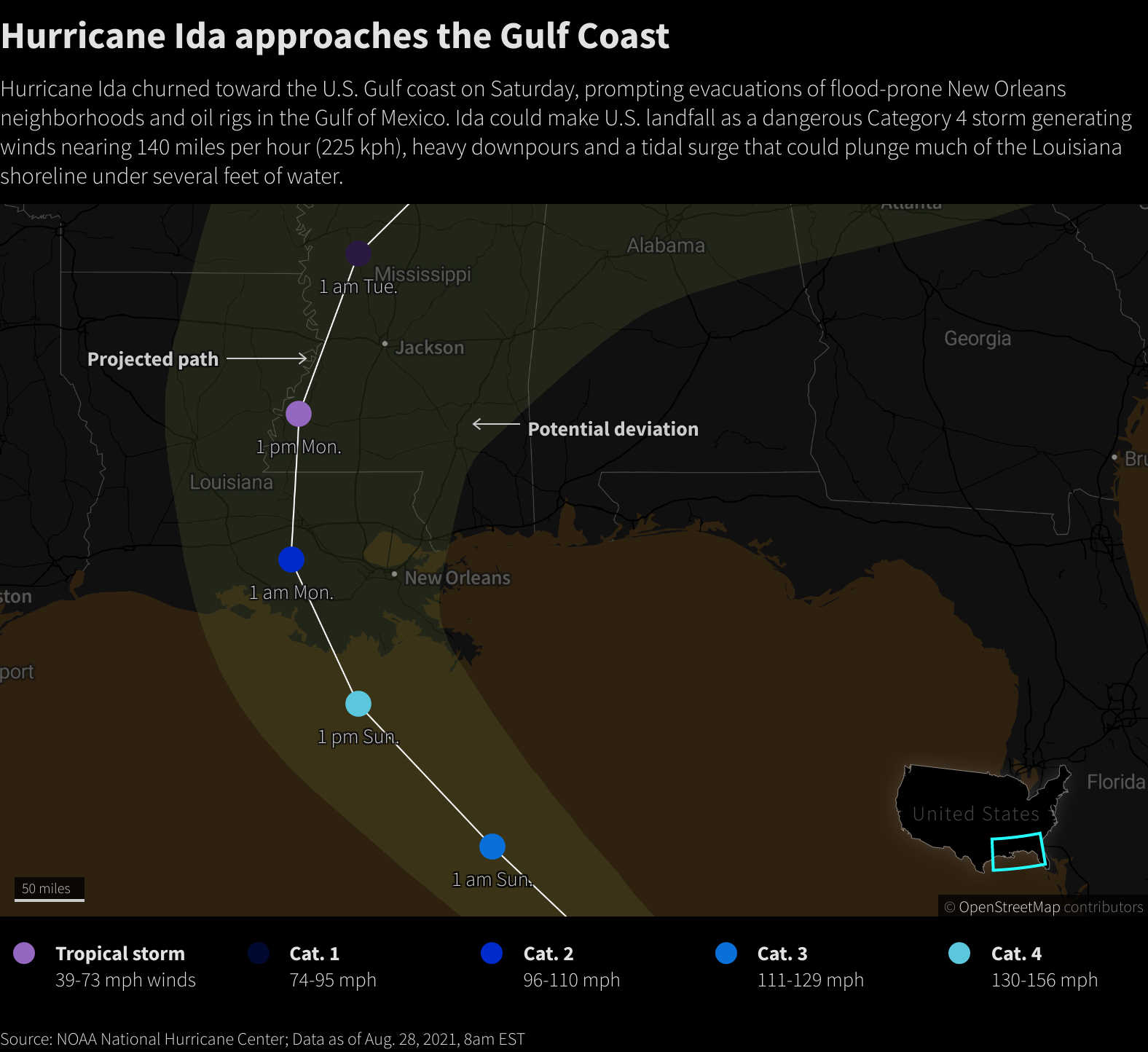 Gasoline demand in Louisiana was up 71% for the week ended Friday, said Patrick DeHaan, head of petroleum analysis at tracking firm GasBuddy.

Ida, the ninth named storm and fourth hurricane of the 2021 Atlantic hurricane season, may well exceed the strength of Hurricane Laura, the last Category 4 storm to strike Louisiana, by the time it makes landfall, forecasters said.

The region was devastated in August 2005 by Hurricane Katrina, which killed more than 1,800 people.

Ida’s satellite presentation has continued to improve this
afternoon, with the eye becoming more apparent in both infrared and
visible satellite imagery. The eye is surrounded by a symmetric
ring of cold cloud tops and new convection with lightning as seen
by the GOES-16 GLM sensor has been rotating around the western
portion of the eyewall within the past few hours. The upper-level
outflow has also become well established over the hurricane and
several spiral bands are noted over the northern semicircle.
Subjective Dvorak satellite intensity estimates have increased to
T5.0 and these support increasing the initial intensity to 90 kt
for this advisory. Both NOAA and Air Force Reserve reconnaissance
aircraft are scheduled to be in the hurricane within the next few
hours and should provide additional information on Ida’s current
strength. Earlier aircraft and satellite wind data indicate that the
tropical-storm-force wind field has continued to expand over the
eastern semicircle and the initial wind radii have been adjusted
outward.

The hurricane appears to have begun its anticipated rapid
intensification phase. A favorable upper-level wind pattern, warm
waters along the track, and a moist atmosphere are expected to allow
for additional rapid strengthening overnight and early Sunday. This
is again supported by the majority of the intensity models, and the
NHC wind speed forecast continues to call for rapid strengthening,
bringing Ida to Category 4 status within 12 to 18 hours. An eyewall
replacement cycle could occur as Ida nears the northern Gulf coast,
so some fluctuations in intensity are possible during that time.
After landfall, rapid weakening is expected, and Ida is forecast to
become a post-tropical cyclone by day 4, and it is likely to be
absorbed along a frontal zone by day 5.

Ida has moved a little to the right of the previous track, but the
long-term motion motion is still northwestward or 320/14 kt. The
track forecast philosophy remains unchanged. Ida is expected to
continue on a northwestward heading through late Sunday as it is
steered around the southwestern portion of a deep-layer ridge near
the southeastern United Stated coast. After landfall, Ida’s forward
motion is forecast to slow when it turns northward around the
western extent of the aforementioned ridge. By Tuesday, the cyclone
should reach the southern extent of the mid-latitude westerlies,
causing it to turn north-northeastward across the Lower Mississippi
and Tennessee Valleys. The track guidance has nudged slightly
eastward during the first 12-24 hours, primarily due to the more
northeastward initial position, and this has required a slight
rightward adjustment in the new official forecast at those times.
The remainder of the NHC forecast is largely unchanged from before,
and lies near various consensus models and the GFS ensemble mean.

Users are again reminded to not focus on the exact details of the
track forecast as storm surge, wind, and rainfall impacts will
extend far from the center. Rainfall impacts will also spread
inland across the Lower Mississippi and Tennessee Valleys through
early next week after Ida makes landfall.

1. There is a danger of life-threatening storm surge inundation
Sunday along the coasts of Louisiana, Mississippi, and Alabama
within the Storm Surge Warning area. Extremely life-threatening
inundation of 9 feet or greater above ground level is possible
somewhere within the area from Morgan City, Louisiana, to the coast
of Mississippi. Overtopping of local levees outside of the Hurricane
and Storm Damage Risk Reduction System is possible where local
inundation values may be higher. Interests throughout the warning
area should follow any advice given by local officials.

2. Ida is expected to be an extremely dangerous major hurricane when
it reaches the coast of Louisiana. Hurricane-force winds are
expected Sunday in portions of the Hurricane Warning area along the
Louisiana coast, including metropolitan New Orleans, with
potentially catastrophic wind damage possible where the core of Ida
moves onshore. Actions to protect life and property should be rushed
to completion in the warning area.

3. Damaging winds, especially in gusts, will spread inland near the
track of the center of Ida across portions of southeastern Louisiana
and southwestern Mississippi Sunday night and early Monday. These
winds will likely lead to widespread tree damage and power outages.

4. Ida is likely to produce heavy rainfall Sunday into Monday across
the central Gulf Coast from southeast Louisiana, coastal
Mississippi, and far southwestern Alabama, resulting in considerable
to life-threatening flash and urban flooding and significant river
flooding impacts. As Ida moves inland, significant flooding impacts
are possible across portions of the Lower Mississippi, Tennessee,
and Ohio Valleys through Wednesday.