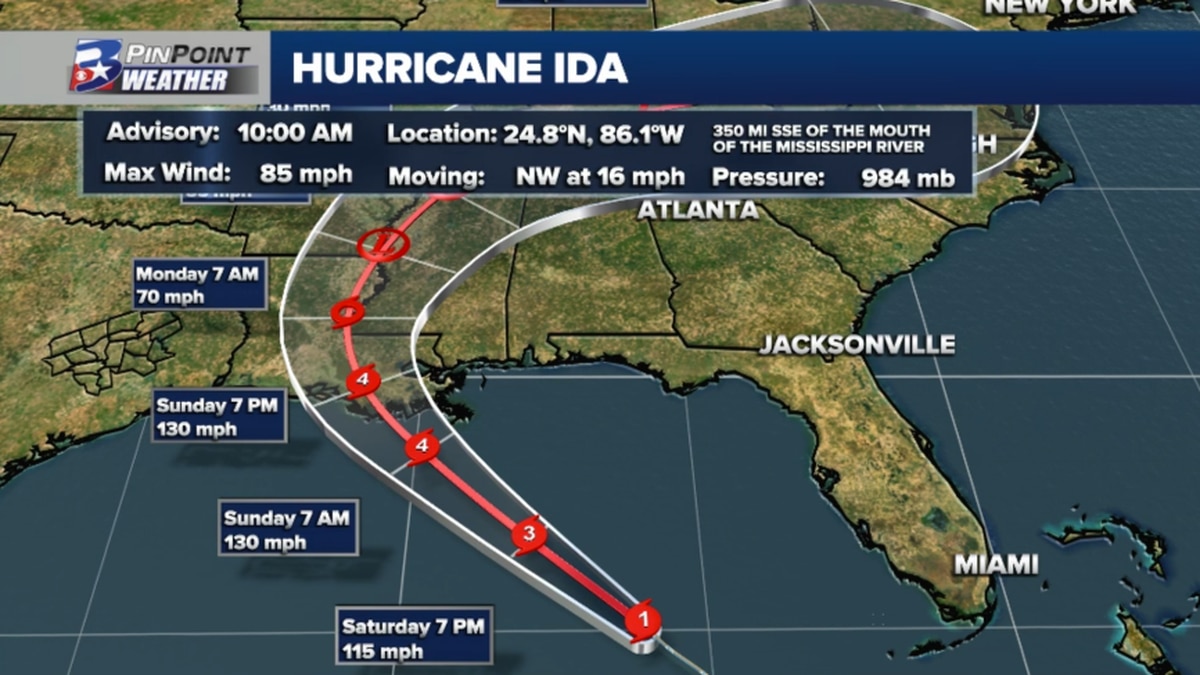 The satellite presentation of Ida has continued to improve this
morning with the center embedded within a fairly symmetric Central
Dense Overcast and hints of the eye in both visible in infrared
satellite imagery. Earlier microwave imagery revealed a well-
defined low- to mid-level eye and excellent spiral banding over the
northern semicircle. Both NOAA and Air Force Reserve hurricane
hunter aircraft, somewhat surprisingly, have not found a
significantly deepening tropical cyclone yet, but given the very
recent increase in organization and structure, the winds are likely
to catch up to the satellite appearance very soon. Using the latest
flight-level and SFMR wind data from the aircraft and satellite
intensity estimates the initial wind speed remains 75 kt for this
advisory. The aircraft data does indicate that Ida’s wind field has
expanded, and the NHC wind radii have been adjusted accordingly.

Given the improved inner-core structure Ida appears poised to
rapidly intensify during the next 12 to 24 hours as it remains
within a favorable environment of low vertical wind shear and over
warm water. Although the interpolated intensity guidance has
lowered somewhat due to the fact that Ida has not significantly
strengthened yet, the explicit forecasts from the dynamical models
continue to support significant deepening, and the latest runs of
the HWRF and HMON models indicate Ida will reach Category 4 strength
before landfall. The new NHC intensity forecast calls for rapid
intensification to Category 4 strength during the next 24 hours.
After that time, fluctuations in intensity are possible due to
eyewall replacement cycles as Ida approaches the northern Gulf
coast. After landfall, rapid weakening is expected and Ida is
forecast to weaken to a tropical depression by Monday night, and
become a post-tropical cyclone as it moves over the Tennessee Valley
by mid-week.

Ida has been moving steadily northwestward or 315/14 kt. A deep
layer ridge near the southeastern United States coast is forecast to
shift westward during the next day or so, and this should continue
to steer Ida northwestward through landfall on Sunday. The track
guidance remains in remarkably good agreement through 36 hours, and
the new NHC track forecast is essentially unchanged during that
time, and continues to indicate that Ida will reach the coast of
Louisiana on Sunday. After landfall, Ida will be near the western
extent of the ridge and should turn northward and then northeastward
as it recurves into the southern portion of the mid-latitude
westerlies. The track guidance has shifted slightly westward beyond
48 hours, and the track forecast over the southern U.S. and the
Tennessee Valley has been adjusted accordingly. Users are again
reminded to not focus on the exact details of the track forecast as
storm surge, wind, and rainfall impacts will extend far from the
center. Wind and rainfall impacts will also penetrate inland
through early next week after Ida makes landfall.

1. There is a danger of life-threatening storm surge inundation
Sunday along the coasts of Louisiana and Mississippi within the
Storm Surge Warning area. Extremely life-threatening inundation of
9 feet or greater above ground level is possible somewhere within
the area from Morgan City, Louisiana, to the coast of Mississippi.
Overtopping of local levees outside of the Hurricane and Storm
Damage Risk Reduction System is possible where local inundation
values may be higher. Interests throughout the warning area should
follow any advice given by local officials.

2. Ida is expected to be an extremely dangerous major hurricane when
it reaches the coast of Louisiana. Hurricane-force winds are
expected Sunday in portions of the Hurricane Warning area along the
Louisiana coast, including metropolitan New Orleans, with
potentially catastrophic wind damage possible where the core of Ida
moves onshore. Actions to protect life and property should be rushed
to completion today in the warning area.

3. Ida is likely to produce heavy rainfall Sunday and Monday across
the central Gulf Coast from southeast Louisiana to coastal
Mississippi, resulting in life-threatening flash and urban flooding
and significant river flooding impacts. As Ida moves inland,
significant flooding impacts are likely across portions of the Lower
Mississippi and Tennessee Valleys Monday and Tuesday.