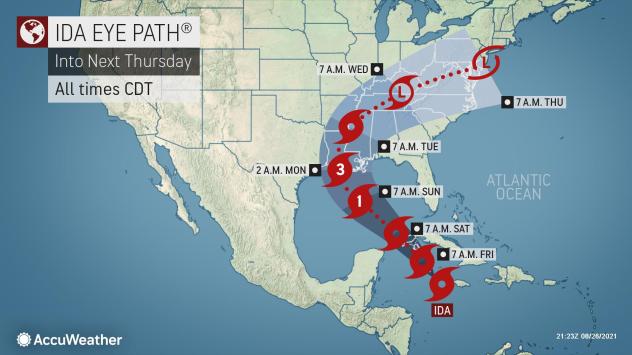 Tropical Storm Ida formed on Thursday afternoon, and AccuWeather forecasters said it was becoming much more likely that parts of the central Gulf Coast would need to prepare for a strike from a major hurricane late Sunday or early Monday.

Ida, the ninth-named storm of the 2021 Atlantic season, which meteorologists have been monitoring since early this week when it was a disorganized cluster of showers and thunderstorms, strengthened quickly on Thursday after it was designated Tropical Depression Nine by the National Hurricane Center (NHC) just before noon.

As the depression was gathering strength over the Caribbean Sea south of Jamaica on Thursday, hurricane hunters from the United States Air Force were sent to investigate the growing storm, though poor weather briefly caused the mission to be delayed. Tropical storm warnings were issued for the Cayman Islands as well as parts of Cuba.

On Thursday afternoon, the tropical storm was moving to the northwest at a speed of 14 mph and had maximum sustained winds of 40 mph. It was 100 miles west-southwest of Negril, Jamaica, and 130 miles southeast of Grand Cayman Island.