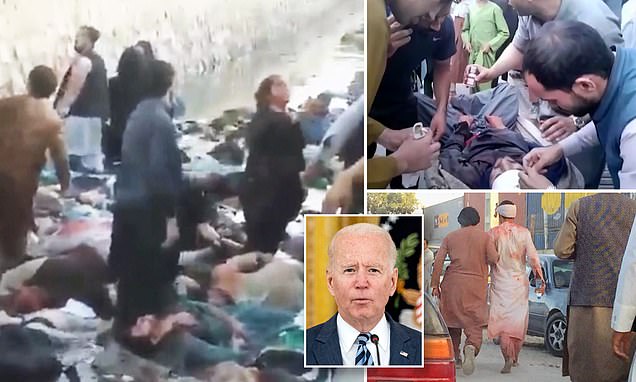 Sen. Lindsey Graham urged the US to take back control of Bagram airbase after reports of two explosions at Hamid Karzai International Airport in Kabul, and warnings from the State Department for Americans to get far away from the airport immediately. ‘I have advocated for days that the Bagram Air Base should be reopened as the Kabul airport is very difficult to defend and has been the only evacuation outlet,’ the South Carolina Republican wrote on Twitter.’We have the capability to reestablish our presence at Bagram to continue to evacuate American citizens and our Afghan allies. The biggest mistake in this debacle is abandoning Bagram.’ An ISIS-K suicide bomber blew himself up amid the swarms of people outside the airport Thursday, killing at least 60 and injuring at least four US Marines. ISIS-K is a sworn enemy of the Taliban. A second explosion was reported nearby a short time later at the airport’s Abbey Gate, where crowds of Afghans have been gathering for more than a week in the hope of being put on one of the evacuation flights out. The State Department has warned Americans to evacuate the area immediately.