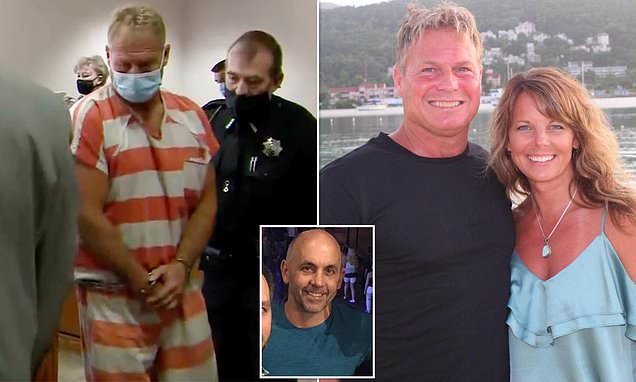 Barry Morphew is in court today for the third day of a preliminary hearing wearing a gray suit, dark tie and white shirt, and clutching an orange envelope. The court in Salida, Colorado, heard that his missing wife Suzanne sent Barry a message saying ‘I’m done’ three days before she vanished. Morphew is charged with Suzanne’s murder but her body has never been found. Earlier this month, it was revealed that she’d been having a two-year affair with Jeff Libler, who she went to high school with. She spent her final days messaging her married lover Lidler, telling him her husband is never around and that she was ‘spying’ on him. Her final message to Lidler came the day before she disappeared, with Suzanne complaining of Barry: ‘He’s always gone somewhere. It never stops’. It’s unclear if Barry discovered the affair but he told a female friend that Suzanne had slept with ‘a man in a basement’.