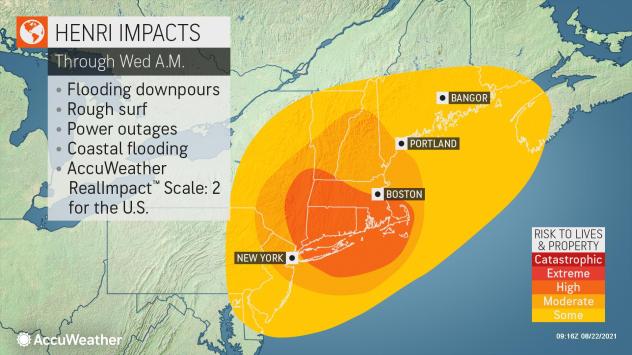 Tropical Storm Henri was racing full steam ahead over the open Atlantic early Sunday morning, headed north toward a rare landfall in New England. AccuWeather meteorologists say that dangerous impacts are already underway for parts of the Northeast.

It’s been just over 30 years since a hurricane delivered a direct hit to New England. The last hurricane to make landfall in New England was Hurricane Bob in 1991. Bob came ashore in Rhode Island as a Category 2 hurricane on the Saffir-Simpson Hurricane Wind Scale on August 19, 1991.

AccuWeather meteorologists are urging those in the path of Henri to hunker down for the storm as the time to complete preparations has passed. Rain spread over southern New England by Sunday morning with winds expected to increase leading up to landfall.

As of Sunday morning, Connecticut Governor, Ned Lamont, has implemented a travel ban on I-95 for all empty tractor trailers, tandem tractor trailers and motorcycles beginning at 11 a.m. EDT Sunday.

Henri is rated a 2 on the AccuWeather RealImpact™ Scale for Hurricanes in the United States due to the anticipated rainfall, damaging winds and storm surge set to impact Long Island and New England. As of Sunday morning, according to the National Hurricane Center (NHC), Tropical Storm Henri was swirling over the Atlantic about 125 miles south-southeast of Montauk Point, New York, which is the very end of Long Island.

The storm had picked up considerable forward speed on Saturday after chugging along at just 7 mph on Friday. Sunday morning Henri continued its brisk pace, tracking to the north at 16 mph.