‘My doomed marriage, my secret abortion, and the lesbian partner who tried to blackmail me’: The off-court dramas of Wimbledon legend Billie Jean King are told for the first time in her new memoir “All In”, writes Tom Leonard 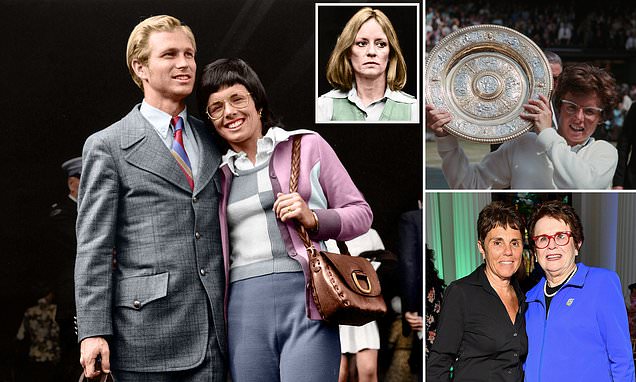 In a candid new memoir, All In, King (left), now 77, also discloses how she was sexually assaulted as a teenager, suffered a debilitating eating disorder and blames, in part, her own homophobia for the decades in which she denied her true sexuality. During a 27-year career, the American player won 39 Grand Slam titles but became arguably more famous for her off-court life – her campaigning feminism and the long-rumoured lesbianism which she only finally acknowledged in 1987 when she divorced Larry to be with her former doubles partner Ilana Kloss. In her autobiography – which is due out in the UK next month but was published in the U.S. this week – King also discusses the abuse she endured over her looks and the humiliating ordeal she suffered when she had an abortion in 1971. The famously bespectacled King was the leading light of a new breed of female player: fiercely ambitious, hard-hitting on court and determined not to put up with the sexism of a sport that paid them far less in money and respect than the men. (Centre, Marilyn Barnett, top right, Billie Jean King, bottom right, Billie Jean King and Ilana Kloss.)