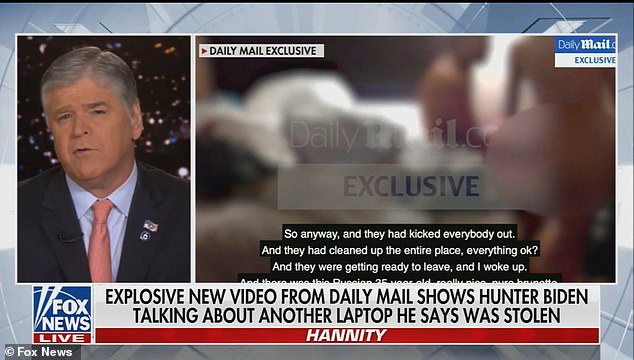 Sean Hannity on Wednesday night demanded to know why arrests had not been made in the case of Hunter Biden – pointing out that the FBI have had possession of the president’s son’s computer ‘for quite some time’.

Hunter’s laptop, which was left at a Delaware repair shop, first became a political football in October 2020, and has provided a steady stream of damaging stories ever since.

On Wednesday DailyMail.com obtained new video from the laptop, in which Hunter claimed Russians stole another one of his laptops for blackmail while he was close to overdosing in a Las Vegas hotel room.

The alleged incident would mean Hunter lost a total of three computers – the first abandoned at a Delaware computer store and the second seized by federal agents – each likely to hold sensitive information on President Joe Biden and the embarrassing pictures, videos and communications of his son.

The third laptop still appears to be missing – and was taken by Russian drug dealers after they partied with Hunter in Vegas, he told a prostitute in a conversation caught on camera.

‘The Daily Mail has now has now released the shocking video of a naked Hunter,’ said Hannity.

‘It shows and suggests that Joe Biden himself may be compromised by the Russians.’

Hannity demanded to know what was taking the authorities so long to investigate.