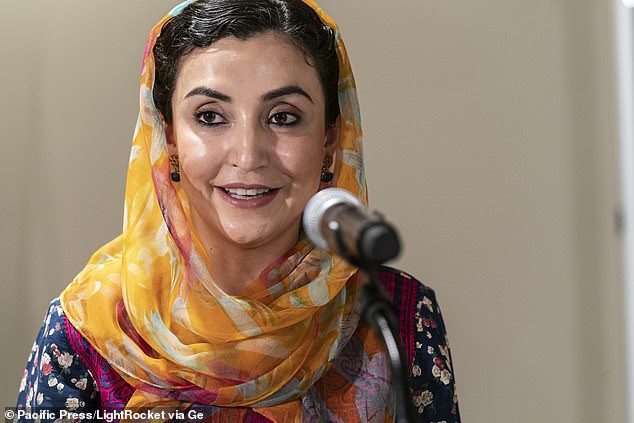 Afghanistan’s Ambassador to the United States has slammed President Biden for suggesting there’s a ‘political solution’ to the onslaught of violent Taliban fighters amid fears Kabul could fall to them within 30 days.

Responding to Defense Department Press Secretary John Kirby’s claim that it was no longer feasible for the US to offer air support to Afghan forces, Adela Raz said: ‘But it is feasible because you did that. You did that post-9/11 and it you took control of the entire country in 2 weeks.’

She highlighted how there has never been an example of a government making peace with a terrorist group, and warned the US not to assume that political negotiations with the Taliban would yield positive results.

Alluding to her desire for continued military support, Raz said: ‘We have to be also cautions that should not put all our eggs in one basket.’

She said that her own family members are currently joining the fight against the Taliban, adding: ‘I’m assuming that there would be a political solution. We have to prepare for the possibility. What if that is no political solution? I’m not for war. I grew up in war. I lost my relatives. I don’t want it.

‘I think for every Afghan it’s difficult we don’t advocate for war. But there is a time we need to defend the country and ourselves.’

Click here to read more.
Source: By Adam Schrader for Dailymail.com and Associated Press and AFP and Reuters