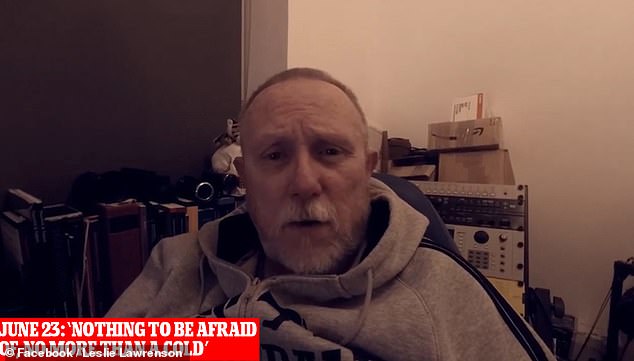 A Cambridge University graduate recorded himself downplaying his Covid symptoms and telling viewers the disease was not to be feared days before the virus claimed his life.

Solicitor Leslie Lawrenson, 58, died at his home in Bournemouth, Dorset, just nine days after releasing footage to Facebook explaining why Covid-19 was ‘nothing to be afraid of’.

Leslie had no underlying health conditions and had previously refused his vaccine because he believed he ‘did not need it’ and instead placed his faith in his immune system.

Wanting to record ‘the realities’ of having the virus for ‘99,9% of us’, anti-vaxxer Leslie took to social media to share two vlog posts earlier this summer.

With intermittent coughing breaking up his monologue, he explains his symptoms and describes them as ‘no worse than a cold’.

He later criticises the Government’s approach to Covid-19 restrictions, saying ‘these are things we have to suffer, it’s part of living’, before urging viewers to ‘trust’ their immune systems over vaccines.

In the videos shared to his Facebook feed, Leslie describes having a ‘very high temperature, aches, pains and shivers’ at around 11pm on June 24