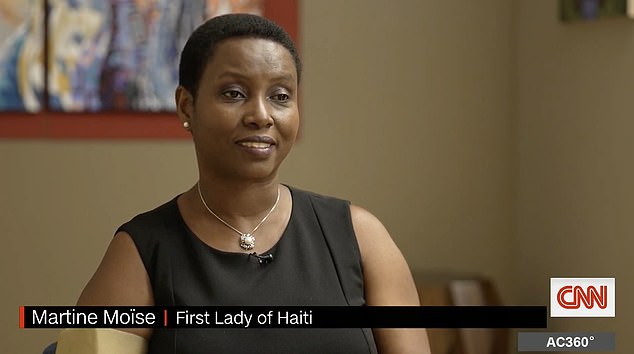 Haiti’s First Lady Martine Moïse said gunmen were ‘looking for something’ in their bedroom before shooting her husband dead.

Mrs Moïse appeared in her first TV interview since the attack and asked why not a single security guard who was protecting the home was injured.

After the attack, when she was finally let out of the house by police, Mrs Moïse noticed that there were no security guards outside and came to the conclusion they had either ‘let the attackers in’ or ‘abandoned their posts’.

The President of Haiti Jovenel Moïse was assassinated by gunmen in a night-time raid that also left Mrs Moïse seriously injured.

Mr and Mrs Moïse were asleep in their bed in their home on the hills of Port-au-Prince on July 7 when deafening gunshots rang out and woke them up in a state of panic.

Mrs Moïse and her husband hid in the bedroom when the door burst open and the attackers ‘ransacked the room’, after Mrs Moïse was hit with a bullet.