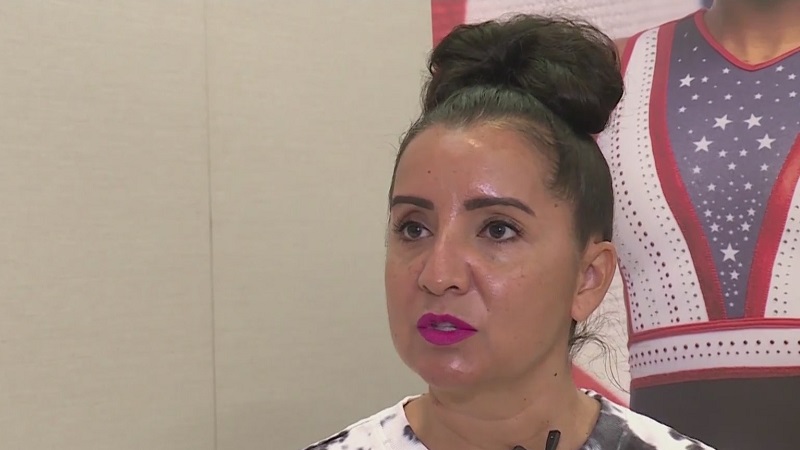 Olympic gymnast Jordan Chiles’ mother will be able to watch her daughter compete in Tokyo from the comfort of her own home after a judge agreed to delay the start of her prison sentence on Wednesday.

Jordan’s mother, Gina Chiles, was scheduled to report to prison on July 27 for a one-year sentence for embezzlement — the same day that Jordan, 20, will compete in the women’s gymnastics team final at the Olympic Games.

But a federal judge in Portland with her lawyer’s plea to postpone the start of her sentence by one month to give her the chance ‘to support her daughter throughout the Olympics’ and ‘give Mrs. Chiles’ daughter at least some additional time to have her mother’s emotional support and guidance during such a monumental time in her young life.’

While the team is off to Tokyo this month for the games, they are barred from traveling with family or friends, meaning that Jordan’s mother will not be allowed to accompany her.

She will, however, be able to watch in the comfort of her own home with loved ones after a judge agreed that she could report to prison a month later than previously scheduled.

Gina pleaded guilty to one count of wire fraud for embezzling $1.2 million from her clients and business partners through Inspire Vision Property Management LLC, a commercial properties management business.

She was sentenced to one year and one day in federal prison for the crime, and when she gets out, she will have to repay what she stole.

But this week, her lawyer asked a judge to postpone her sentence to give her the chance to root for her daughter in the Olympics, and prosecutors did not object.

‘Every moment that I watch Jordan is the most amazing moment as a mom,’ Gina told Hoda Kotb on the Today show on Wednesday before she learned that her term was delayed.

‘And so I just am looking at it as not bittersweet, but just sweet, period, that she’s here.’

Gina also admitted in the interview that she doesn’t actually enjoy watching her daughter compete because it’s so stressful, calling the high-stakes viewing ‘awful.’

‘I wish there was a way to support without physically having to watch it. I always say, I wish I could just blink my eyes and then know the outcome, but the outcome be good,’ she said.

While she and Jordan are surely pleased with the ruling, Gina’s biggest victim is not.