Texas House Republicans Vote 76-4 to Arrest Runaway Democrats for Blocking Voting Rights Bill: State Dems Sing We Shall Overcome Outside the Capitol and Insist They Are Willing to Go to Jail After Fleeing on Private Jets 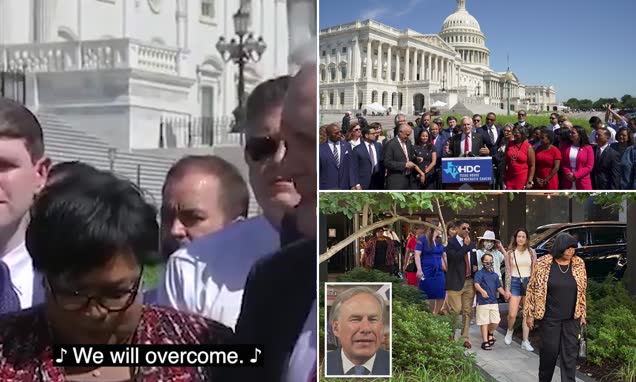 Republicans in the Texas State House voted 76-4 on Tuesday to arrest the runaway Democrats who fled to Washington D.C. to break the quorum and block the passage of Governor Greg Abbott’s voting rights bills.

‘Members, a sergeant-at-arms and any officer appointed by him are directed to send for all absentees whose attendance is not excused for the purpose of securing and maintaining their attendance under warrant of arrest if necessary,’ Texas House Speaker Dade Phelan announced from the State House floor.

Texas House rules allow the sergeant-at-arms to arrest members who are not present at the Capitol for a vote – and the show of disapproval Tuesday could result in the lawmakers’ arrest when they land back in the Lone Star State.

The Tuesday vote, however, doesn’t hold much weight as long as the Democrats remain in Washington since by crossing state lines they have escaped jurisdiction of Texas law enforcement.

‘If there are any House Sargent at Arms looking for me… I’m definitely in the Texas Capitol building, somewhere,’ one Democratic state representative tweeted in taunting his colleagues back in Texas on Tuesday.

Shortly after, he followed up with another tweet saying: ‘Getting warmer…’

He also posted an image to Twitter of a caesar salad in a styrofoam take-out container and a can of Coke Zero after the Texas legislature voted to arrest the group.

‘My fist (sic) meal as a fugitive. Delicious,’ Wu wrote.

The few dozen state lawmakers maintain that they aren’t afraid of Governor Abbott’s threats to arrest them for fleeing the state to break a quorum and avoid voting on Republicans ‘ election legislation.

It is not immediately clear if President Joe Biden plans to meet with them, but Jean-Pierre said when asked if he supports their decision: ‘He applauds their courage.’

During a press conference in front of the Capitol on Tuesday morning, the large group broke out into song with a Civil Rights-era gospel, and getting the words wrong in claiming ‘we will overcome’ after arriving in D.C. on a pair of jets that cost them $100,000 to charter.

‘I’m not worried about the threat of being arrested,’ Texas State Representative Jasmine Crockett told CNN the morning after arriving in D.C.

‘I don’t worry probably because I know the law,’ she continued. ‘I’ve not committed a crime, so I can’t get arrested.’

Trey Martinez Fischer, a fellow Democratic member of the Texas State House, said Tuesday that the group of around 60 lawmakers plan to wait out the full 30-day legislative session in Washington D.C.

‘This is the risk that we take to stand up for democracy,’ Martinez Fisher told CNN when asked about the potential of Abbott sending law enforcement after them.

The group is staying at the Washington Plaza Hotel in Northwest D.C., where rooms start at $199 per night. The hotel features a luxury outdoor pool and lounge surrounded by privacy greenery and trees.

The lawmakers left their hotel on Tuesday morning in buses headed for the Capitol, where they held a quick press conference outside the building.

Martinez Fischer said they are working on setting up meetings on Capitol Hill after fleeing Texas on Monday and breaking quorum in order to block Republican-proposed voting rights laws from passing. He said nothing is set in stone yet.

A quorum is the minimum number of members needed to conduct legislative proceedings and assure they are valid. In the case of Texas, two-thirds of its House members are needed to reach a quorum, which is 100 people.