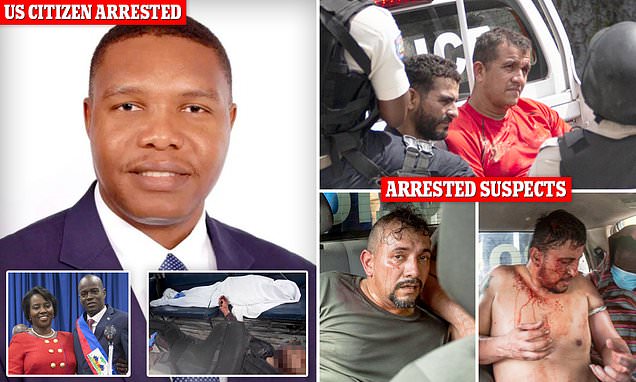 An American ‘mercenary’ and former head of security at the Canadian Embassy in Haiti is among the six ‘assassins’ who have been arrested over the murder of President Jovenel Moïse, according to a government official.

James Solages, a US citizen of Haitian descent and president of a local charity, was taken into custody over Wednesday’s early morning raid on Moïse’s mansion in the hills above Port-au-Prince, Haiti, Haiti’s Minister of Elections and Inter-party Relations Mathias Pierre told the Associated Press.

Solages is the 35-year-old president of the board of directors of Jacmel First, a charity founded in south Florida in 2019 which is focused on ending childhood hunger in Haiti.

Pierre said at least one of the other suspects arrested is also believed to be a Haitian American.

The minister would not provide additional details about Solages’ background, nor would he provide the name of the second Haitian-American arrested. He also did not detail either of their alleged involvement in the assassination or what evidence led to their arrests.

The two US citizens are among six now captured alive by Haitian authorities, after police said Thursday they had detained four more suspected members of the hit squad responsible for assassinating Moïse and leaving his wife seriously wounded.

Four other suspects were shot dead by police during a gunfight, said Pierre, while a nationwide manhunt is still ongoing for at least two other suspects still at large. Authorities earlier said seven suspects had been killed.

Questions are now mounting about the nation’s future and who will be Moise’s successor as Haiti is already in the grips of poverty, gang warfare and accusations of corruption.

Moise’s assassination came just one day after Moise named Ariel Henry as the new prime minister taking over from Joseph once he builds his government.

However, Interim Prime Minister Claude Joseph assumed sole power of the embattled country, declaring a ‘state of siege’ granting him absolute authority and the two men have given somewhat conflicting accounts over who should rightfully be in power.

Joseph on Thursday said he had spoken with US Secretary of State Antony Blinken and asked the US for ‘technical support’ to help Haiti hold elections in the coming days while the White House also called for Haiti to hold an election this year.