Olympic hammer thrower Gwen Berry turns her back on flag during national anthem, drapes black ‘Activist Athlete’ shirt over her head and says it was ‘disrespectful and a setup’ to play song while she took bronze at trials 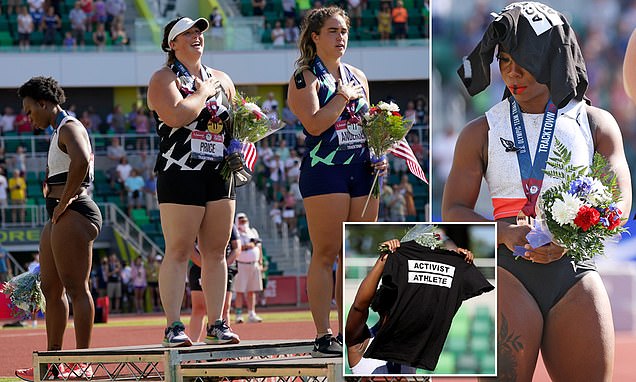 Hammer thrower Gwen Berry turned away from the American flag on Saturday while on the podium for a medal ceremony at the U.S. Olympic trials, saying it was ‘disrespectful’ to play the national anthem while she took a bronze medal.

While the anthem played at the trials in Eugene, Oregon, Berry placed her left hand on her hip and shuffled her feet. She took a quarter turn, so she was facing the stands, not the flag.

Toward the end, she plucked up her black T-shirt with the words ‘Activist Athlete’ emblazoned on the front, and draped it over her head.

‘I feel like it was a set-up, and they did it on purpose,’ said Berry, who finished third to make her second U.S. Olympic team and is an outspoken activist on racial justice issues. ‘I was pissed, to be honest.’

Berry has previously protested against racism during competition, most recently raising a fist at the trials on Thursday, and said that she felt insulted by the Star-Spangled Banner playing as she took the podium.