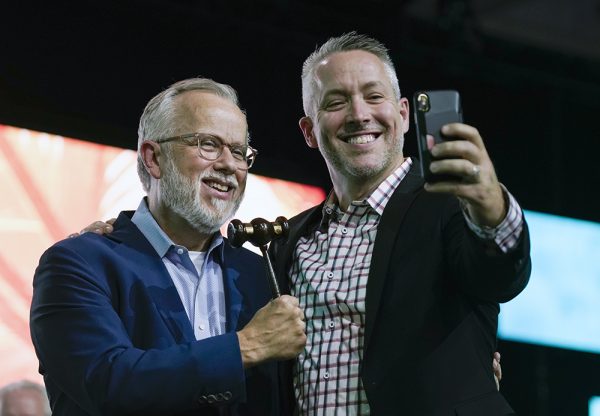 (RNS) — The newly elected president of the Southern Baptist Convention has apologized for giving a sermon where he used material from his predecessor without revealing where it came from.

A video posted on YouTube Thursday (June 24) showed clips of a ­­­January 2020 sermon on the New Testament book of Romans from Litton and clips from a January 2019 sermon on the same Bible passage from J.D. Greear, whose term as SBC president ended in June.

At several points, the comments from the two preachers are nearly identical.

“Everybody turn right now to your neighbor, look him in the eyes,” Greear says toward the beginning of his sermon. “If you know them, if you know them, put your hand on their shoulder and say, ‘this is going to be a really tough week for you.’”

Litton does something very similar.

“I want you to turn to your neighbor right now. And I want you to say, I know this sermon is going to be really tough for you,” he says.

The two pastors also say very similar things about homosexuality, which both believe is sinful.

But they each say Christians have erred by treating sexual sin as if it is worse than other sins — and singling out LGBT people as the worst of sinners.

In a statement Saturday, Litton said that while doing research and sermon prep for the passage, he had seen Greear’s sermon and found it helpful.

“I found that J.D. Greear’s message on Romans 1 was insightful, particularly his three points of application,” he said in the statement. “With his permission, I borrowed some of his insights and those three closing points.”

At no point in the sermon did Litton give credit to Greear. That’s something he said he regrets.

“As any pastor who preaches regularly knows, we often rely on scholars and fellow pastors to help us think and communicate more clearly with the goal of faithfully preaching the truths of Scripture to our congregations,” he said in the statement.

“But I am sorry for not mentioning J.D.’s generosity and ownership of these points. I should have given him credit as I shared these insights.”

Greear addressed the matter in a statement of his own. He said he’d spoken with Litton and given him permission to use his material. He used a phrase often used by other preachers, saying, “I told him that whatever bullets of mine worked in his gun, to use them.

“My own take on these kinds of things is usually shaped by the input of many godly men and women,” he said in the statement. “Ed and I have been friends for many years and we have talked often about these matters, and I was honored that he found my presentation helpful.”

Borrowing from other preachers is a common practice among pastors. When it goes too far, that can lead to plagiarism. In 2017, for example, a book of devotions by Hillary Clinton’s pastor was pulled by the publisher after news reports alleged that the book contained plagiarized material from other pastors.

Some preachers also use research assistants or “sermon helps” to find illustrations that help them convey the meaning of the biblical text to their audience.

That can be a form of cheating, argues theologian Scot McKnight, a professor at Northern Baptist Theological Seminary. McKnight believes a sermon isn’t just a speech. Instead, it should flow out of a pastor’s encounter with God in the Bible and be written for a specific congregation.

“The whole idea of taking someone else’s sermon destroys what sermon-making is supposed to be,” he told Religion News Service earlier this year.

Greear’s 2019 sermon has created controversy in the past. During the sermon, Greear said the Bible speaks more about sins like pride and greed than sexual sin.

“The Bible appears more to whisper on sexual sin compared to its shouts about materialism and religious pride,” he said. That line is a reference to a comment from evangelical Bible teacher Jen Wilkin as well as to a statement from famed theologian R.C. Sproul, who warned his students, “I find that it is always dangerous to shout where God has whispered.”

“And when a man of God stands up and stutters and waffles and wavers on this, he is giving indirect permission for people to enter a lifestyle that is degrading and destructive,” he told conservative talk show host Todd Starnes. “That is an unloving thing to do.”

Starnes is a vocal proponent of the Conservative Baptist Network, which claims the SBC has become “woke” and liberal. A CBN candidate, Georgia pastor Mike Stone narrowly lost to Litton in the SBC’s presidential race earlier this month.

Greear said his critics have taken his words out of context. He also said the controversy over his sermon — and Litton’s use of his sermon — reflects a lack of trust in the nation’s largest Protestant denomination.

“I have said before — a culture of suspicion happens automatically; a culture of trust takes intentionality. Our convention desperately needs to build a culture of trust, and that starts with assuming the best about each other and giving the benefit of the doubt wherever we can,” said Greear.

“I am praying for Ed Litton as he leads us to focus on the Great Commission.”