There’s a devil loose: Mom-of-two dies after jealous husband bludgeons her to death with a crowbar wrapped in plastic at NYC bus stop while yelling ‘How dare you cheat on me?’ 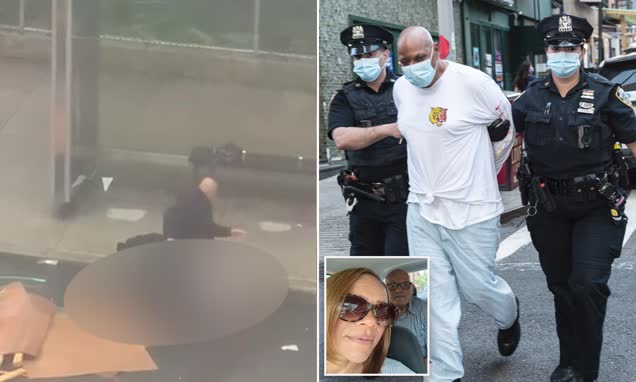 WARNING GRAPHIC CONTENT: Julio Aponte, 63, (pictured right) is seen in disturbing video beating his wife and smashing her with a crowbar at a bus stop in the Washington Heights section of Manhattan. His wife Maria Kelly, 49, died Friday, four days after the attack. Aponte, wearing a black hoodie and black pants, is seen straddling his wife as he bludgeons her with the crowbar covered in plastic. During the attack, he is heard yelling at his wife ‘How dare you cheat on me?’ Bystanders screamed in horror and begged Aponte to stop before he fled on a motorcycle and was arrested nearby. Aponte was initially charged with attempted murder and assault, but he is now expected to be charged with murder.