Can a tender-hearted president solve the Southern Baptists’ trust problem? 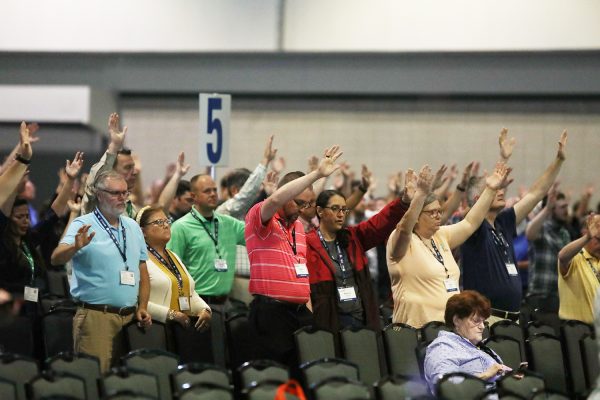 (RNS) — The Southern Baptist Convention has trouble with a capital T — and that stands for trust.

The lack of trust was palpable during the SBC’s recent annual meeting in Nashville, Tennessee, where local church messengers often overruled Baptist leaders from the meeting floor.

“As far as trust in leadership — that is one thing that came through loud and clear,” James Pittman, pastor of New Hope Community Church in Palatine, Illinois, told Religion News Service in a phone interview after the annual meeting. “There’s no trust.”

The SBC’s leadership has gotten pushback in recent months over a statement against critical race theory made by the presidents of six SBC seminaries, costing the support of prominent Black pastors, as well as over its slowness to get a handle on sexual abuse cataloged in a 2019 Houston Chronicle report.

These controversies have been exacerbated by two high-profile departures — that of influential Bible study teacher Beth Moore, who disagreed with the SBC leaders’ attachment to former President Donald Trump, and the denomination’s chief ethicist, Russell Moore. The latter, who is not related to Beth Moore, was a champion of sexual abuse survivors, and in a letter leaked just weeks before the annual meeting he criticized the leadership for silencing him.

All of these internal pressures are playing out against the larger backdrop of decline: The SBC has lost more than 2 million members since 2006.

The person charged with helping lead the convention forward is a soft-spoken Mobile, Alabama, pastor, Ed Litton, best known for his work on racial reconciliation. Litton was elected SBC president in a hotly contested election, winning over Georgia pastor Mike Stone in a runoff.

Stone is a founder of the Conservative Baptist Network, which contends the convention has become “liberal” and “woke.” His share of the presidential vote shows that many in the rank and file share the CBN’s concern.

Litton rejects those claims but has said he wants to work with all Southern Baptists to “iron out our differences.”

“I want to be clear that my goal is to build bridges and not walls,” he said during his first news conference.

Doing that will take a lot of work.

Litton was candid about the challenges facing the SBC during an interview two days after his selection. Dressed in jeans and a sport coat, he described himself as a local church pastor who deals mostly with the real-life issues of people, rather than as a denominational influencer.

He said he has faith in the people of the SBC, who he said love Jesus and want to love their neighbors. Just after he was elected, he said that outgoing President J.D. Greear, a North Carolina megachurch pastor, told him he would be “blown away” by how kind people would be to him, especially ordinary church members.

Still, he said, he knows there will be troubles in trying to help Southern Baptists continue to work together. It’s not an easy task.

Despite being the largest Protestant denomination in the U.S., with about 14 million members, the SBC is a remarkably flat organization: Southern Baptists often say that the headquarters of the denomination is the local church.

While they cooperate on missions, evangelism, disaster relief, education and other ministries — all that cooperation and is voluntary, and often up for debate.

Nathan Finn, a Baptist historian who serves as provost of North Greenville University in South Carolina, said the recent annual meeting was an example of the SBC’s long history of insider versus outsider battles. And for the most part the insiders lost in Nashville, he said.

Despite Litton’s victory over Stone, Finn does not see the Conservative Baptist Network or other critics of current SBC leaders going away. “There is this perennial tension over, why are we cooperating and who do we trust to navigate the ship,” he said.

Pittman, the pastor at New Hope Church, left Nashville unsure of whether his congregation could remain in the SBC.

“I don’t see a path forward with the convention,” he said, adding that he and other New Hope leaders would meet soon to decide what to do next.

New Hope, founded in the 1950s as the First Baptist Church of Palatine, has been part of the SBC for nearly seven decades. When Pittman arrived in 2014, the church had a handful of older members and was on the brink of closing.

“We got down to almost nobody,” he said. “We stayed around and said, let’s see what God will do with this.”

New Hope has grown in recent years, transforming from a mostly white congregation to a diverse church. He said church members have been concerned about critical race theory and its effects on the SBC. Pittman, who is Black, is mistrustful of CRT too, calling it a “different gospel” that assigned guilt to people based on the color of their skin.

Pittman, a first-time attendee of the annual meeting, was disappointed that messengers did not specifically reject CRT. He felt that Southern Baptist leaders didn’t always follow their own rules. His church, he said, can’t partner with an organization whose leaders do that.

Evan Stewart, assistant professor of sociology at the University of Massachusetts Boston, said the SBC reflects a bigger trend of public distrust of religious institutions.

“It’s hard to tell if that decline is from folks who say ‘I have no confidence in organized religion’ or if folks are saying ‘I am just a little more tempered in my confidence,’” he said.

For his part, Litton said Southern Baptists have to decide whether they want to work together despite their differences.

To cooperate, he said, they will have to exercise what he called their “compassion muscles” by loving their neighbors. He said Southern Baptists are known for their theology but have neglected that part of the faith.

Litton told Religion News Service that he is ready for the challenge ahead. But he knows things could get ugly, and he worries that his church in North Mobile might not be ready for the criticism he will face. “I feel the need to brace them for the social media,” he said. “I don’t think they have a clue what’s coming.”

Southern Baptists, he said, have to be “tender with those who are suffering and mercy, merciful for those who need the gospel.”

Being tender, in Litton’s eyes, is not a sign of weakness. His approach to ministry, especially in recent years, has been shaped by personal tragedy. His first wife, Tammy, was killed in a car wreck after 25 years of marriage.

Her death shook him. Litton said God was with him as he grieved and the experience of grieving made him stronger and more empathetic to others. (In a twist of fate, Litton played a pastor who comforts a grieving father whose daughter was killed in a car crash in the 2011 Christian movie ”Courageous.”)

That experience, he suggests, will give him what it takes to restore faith in the SBC.

“I’ve always been told as a pastor that I had empathy,” he said. “But the reality of pain means I have credibility.”