(The Conversation) — The Religious Exemption Accountability Project, or REAP, filed a class action lawsuit on March 26, 2021, charging that the U.S. Department of Education was complicit “in the abuses that thousands of LGBTQ+ students endured at taxpayer-funded religious colleges and universities.”

According to the suit, those abuses include “conversion therapy, expulsion, denial of housing and health care, sexual and physical abuse and harassment.” The abuses also include the “less visible, but no less damaging, consequences of institutionalized shame, fear, anxiety, and loneliness.”

REAP – an organization that aims for “a world where LGBTQ students on all campuses are treated equally” – holds the Department of Education culpable, arguing that, under the federal civil rights law Title IX, it is obligated “to protect sexual and gender minority students at taxpayer-funded” schools, including “private and religious educational institutions.”

The lawsuit’s 33 plaintiffs include students and alumni from 25 colleges. Most of these schools – including Liberty University and Baylor University – are evangelical, but the list also includes one Mormon and one Seventh-Day Adventist university.

Indeed, the implications of the lawsuit extend to the more than 200 religious schools that discriminate on the basis of sexual orientation. In 2018 these schools received US$4.2 billion in federal aid.

As scholars who write extensively on evangelicalism from historical and rhetorical perspectives, we argue that, whether or not it succeeds, this lawsuit poses a serious challenge to these religious schools.

Holding on to values

Historian Adam Laats argued in his 2008 book, Fundamentalist U that evangelical colleges are forever engaged in a balancing act.

They have had to convince accrediting bodies, faculty, and students that they are legitimate and welcoming institutions of higher education. At the same time, as Laats says, they “have had to demonstrate to a skeptical evangelical public” – alumni, pastors, parachurch leaders and donors – that they are holding fast to the “spiritual and cultural imperatives that set them apart.”

These imperatives differ from school to school, but they can include both doctrinal commitments and lifestyle restrictions. For example, faculty are often required to affirm that the Bible is inerrant, that is, without error and factually true in all that it teaches. For another example, students and staff at many of these institutions are required to agree that they will not consume alcoholic beverages.

And as Laats points out, these schools are obliged to prop up the idea that those “imperatives” are eternal and unchanging.

But it turns out that evangelical imperatives are subject to forces of change. Take, for example, the matter of race.

In the mid-20th century, administrators at many of these schools insisted that their policies of racial segregation were biblically grounded and central to the Christian faith. Not coincidentally, at mid-century segregation was part of mainstream American culture, including higher education.

But as the rhetoric of the civil rights movement became increasingly compelling, administrators at evangelical schools cautiously moved away from their racist practices. By the 1970s, things had changed to the point that racial segregation no longer rose to the status of an evangelical “imperative.”

Of course, there were a few religious schools – including Bob Jones University in Greenville, South Carolina – that continued to practice racial discrimination and got away with it because of the religious exemption that they claimed. All that changed in 1983 when the Supreme Court ruled, in Bob Jones University v. United States, that BJU “did not get to maintain its tax-exempt status due to an interracial dating ban – a policy the university claimed was based in its sincerely held religious beliefs.”

The Court’s decision meant that BJU and similar schools had to make a choice. They could keep racist policies like the ban on interracial dating, or abandon them and retain their tax-exempt status as educational institutions. While BJU held firm for a while, by 2000 it had abandoned its interracial dating ban.

Push for and resistance to change

REAP is leaning on the Court’s decision v. Bob Jones University as a legal precedent for its lawsuit. And this lawsuit comes at a challenging moment for evangelical schools that discriminate on the basis of sexual orientation.

As political scientist Ryan Burge has noted – drawing upon data from the General Social Survey – in 2008 just 1 in 3 white evangelicals between the ages of 18 and 35 believed that same-sex couples should have the right to be married. But by 2018, it found that “nearly 65% of evangelicals between 18 and 35 [supported] same-sex marriage,” a change in keeping with the dramatic change in opinion in the broader culture.

In response, administrators at many evangelical schools have recently adopted a conciliatory rhetoric for LGBTQ students and their sympathetic allies on and off campus. As Shane Windmeyer, co-founder of Campus Pride, a national organization devoted to working to create a safer college environment for LGBTQ students, has recently observed, most Christian colleges now “want to cloud this issue and come off as supportive [of LGBTQ students] because they know it’ll impact recruitment and admissions.”

But at most of these colleges, this conciliatory rhetoric has not translated into scrapping policies that discriminate on the basis of sexual orientation. And there is a reason for this. As several scholars, including us, have amply documented, opposition to homosexuality is central to the Christian right, which is dominated by evangelicals and which has framed the push for LGBTQ rights as an attack on faithful Christians. 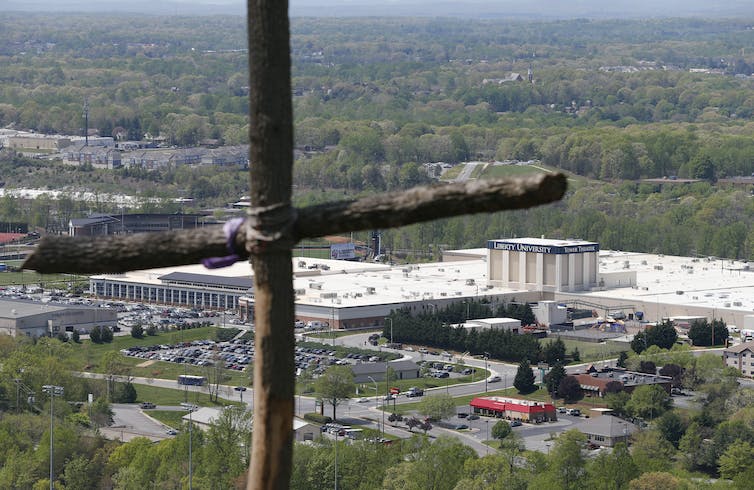 Some administrators and faculty at evangelical colleges see discrimination on the basis of sexual orientation as being at odds with their Christian commitments.
AP Photo/Steve Helber

Evangelical colleges have had to play to two very different audiences when it comes to the matter of sexual orientation and gender identity. Folks in both audiences are paying close attention to the REAP lawsuit. Their responses indicate that “the two-audiences” strategy may no longer be tenable.

See, for example, Seattle Pacific University, an evangelical school founded in 1891 and affiliated with the Free Methodist Church. On April 19 of this year, 72% of the faculty supported a vote of no confidence in its board of trustees. This came after the trustees refused to revise a policy that forbids the hiring of LGBTQ individuals and refused to modify SPU’s statement on human sexuality which stipulates that the only allowable expression of sexuality is “in the context of the covenant of marriage between a man and a woman.”

Adding to the pressure is the announcement that “the students and alumni are planning a campaign to discourage donations to the school and … decrease enrollment at the school.”

In a subsequent article in the Roys Report, a Christian media outlet that reported the development, several commentators indicated a very strong opposition to any effort to end SPU’s discriminatory policies. As one person noted: “I am sorry to hear this once Biblical school has hired so many woke Professors.” Another said: “God hates all things LGBTQ.” A third person observed: “I am a Christian and lifelong resident of the Seattle area. I say good for the SPU Board but sad they have so many faculty with debased minds.”

As Southern Baptist Theological Seminary president Al Mohler has put it, “we are about to see a great sorting where we’re going to find out where every institution stands, and it’s not going to come with the filing of this lawsuit. It’s going to come when the moment that the federal government says … ‘You can have the federally supported student aid support … or you can have your convictions. Choose ye this day.’”

This comes from a hard-line fundamentalist. On the other hand, there are administrators and faculty at evangelical colleges who see discrimination on the basis of sexual orientation as being at odds with their Christian commitments. For them, the choice is whether to accept financial donations from the segment of their constituency opposed to LGBTQ rights, or go with their convictions.

There are indications that the Biden administration is seeking a compromise with these schools that claim a religious exemption that gives them the right to discriminate on the basis of sexual orientation and/or gender identity. But whether or not the REAP lawsuit is successful, religious colleges and universities in the U.S. will keep getting pressed to take a stand on the status of LGBTQ students on their campuses.