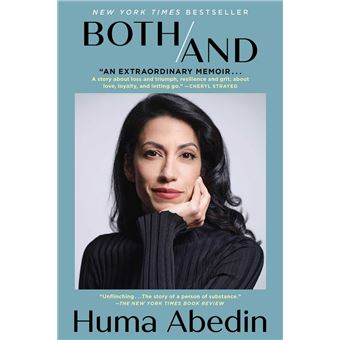 “Both/And: A Life in Many Worlds” will be released November 2nd. Its author Huma Abedin, former close aide to Hillary Clinton will tell in its pages “her inspiring story, coming of age as an American Muslim, the daughter of Indian and Pakistani scholars who split their time between Saudi Arabia, the United States, and the UK.”
According to Scribner, its publisher, Abedin “grapples with family, legacy, identity, faith, marriage, and motherhood.” She shares her “personal accounts as a longtime aide to Hillary Clinton during Mrs. Clinton’s years as First Lady, U.S. Senator, a presidential candidate, Secretary of State, and Democratic Presidential Nominee, and a candid and moving reckoning of Ms. Abedin’s marriage to former Congressman Anthony Weiner.”

Abedin says her memoir will allow her to define herself. “Writing this book gave me the opportunity to reflect on my own life . . . It is a life I am — more than anything — enormously grateful for and a story I look forward to sharing.”

Abedin, 45, has known Clinton since she was a student at George Washington University, when she worked as an intern in 1996 for the then-first lady. She was an aide to Clinton during Clinton’s successful run for the U.S. Senate in 2000; deputy chief of staff during Clinton’s years as secretary of state in the first term of the Obama administration, 2009-2013; and a top adviser during the 2016 election, when Clinton lost in a stunning upset to Republican Donald Trump.

She currently serves as Clinton’s chief of staff.