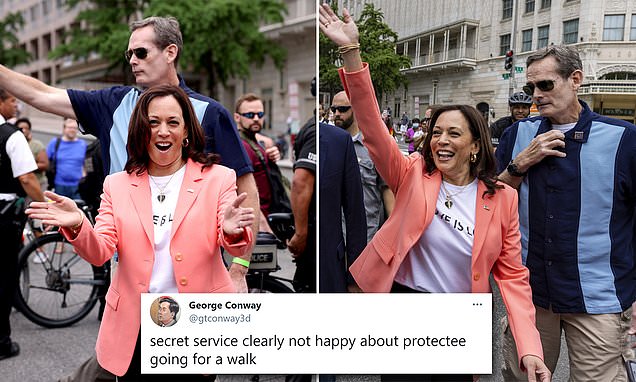 Vice President Kamala Harris made a surprise appearance at the Pride event in Washington on Saturday but it was one of her protectors who drew the attention of many Twitter users.

Any time a president or vice president mingles with the public becomes a challenge for those charged with guarding them – simply because the situation is less under security’s control.

Much of the Twitter attention was directed at a Secret Service agent near the vice president, a tall man in sunglasses who was seen behind Harris in photos and videos as she traversed the parade area.

secret service clearly not happy about protectee going for a walk

Conway was responding to a video clip that shows Harris addressing a crowd at an intersection as the Secret Service agent scanned the scene around her.

“this kind of spontaneous public engagement (especially in a crowd that size) is anxiety inducing for the agents,” another observed, in response to a video showing Harris and second gentleman Douglas Emhoff surrounded by marchers. (Several men around them gave the appearance of being Secret Service agents as they turned their heads left and right while other people marched forward.)

It’s awesome that they did this, but my first thought was for her detail — this kind of spontaneous public engagement (especially in a crowd that size) is anxiety inducing for the agents. https://t.co/jOXjynLrPO