We Told You That President Buhari of Nigeria Is a Different Kind of Cat Than Trump: Donald Trump Praises Nigeria’s Twitter Ban and Says He Wishes He’d Done the Same While He Was President

Donald Trump praised Nigeria’s Twitter ban in a statement and said he wishes he had done the same while he was president of the United States.

Trump also appeared to suggest that he would consider banning Twitter if elected again in the 2024 presidential election.

‘Congratulations to the country of Nigeria, who just banned Twitter because they banned their President. More COUNTRIES should ban Twitter and Facebook for not allowing free and open speech – all voices should be heard,’ Trump said.

‘In the meantime, competitors will emerge and take hold. Who are they to dictate good and evil if they themselves are evil?’

He continued: ‘Perhaps I should have done it while I was President. But Zuckerberg kept calling me and coming to the White House for dinner telling me how great I was. 2024?’ 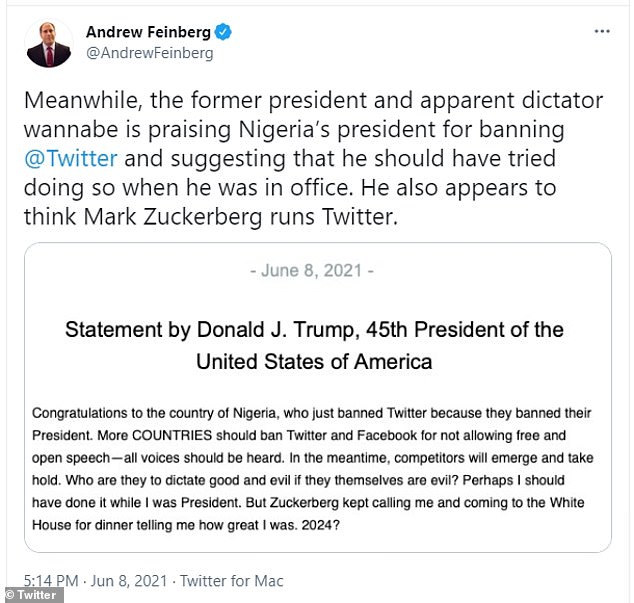 The statement falsely said that Twitter had banned Nigerian President Muhammadu Buhari. The social media company had removed a tweet from Buhari that was seen as threatening separatist movements, with Twitter saying that it violated its policies.

He was branded a ‘wannabe dictator’ by journalist Andrew Feinberg. The former president used his Twitter account to make big announcements, pick fights and share what often appeared to be his stream of conscious with his 88.7 million followers.

Trump was permanently banned the day after the deadly riots at the U.S. Capitol on January 6 after Twitter accused him of using his account – which had close to 90 million followers – of inciting violence.

Trump has also been suspended from Facebook for two years, after Zuckerberg’s company gave a seemingly finite end to Trump’s ban from the platform.