Son of famed Michigan coach Bo Schembechler says former team doctor, serial predator Robert Anderson, sexually abused him too, and his father ‘failed to protect him and other athletes’ 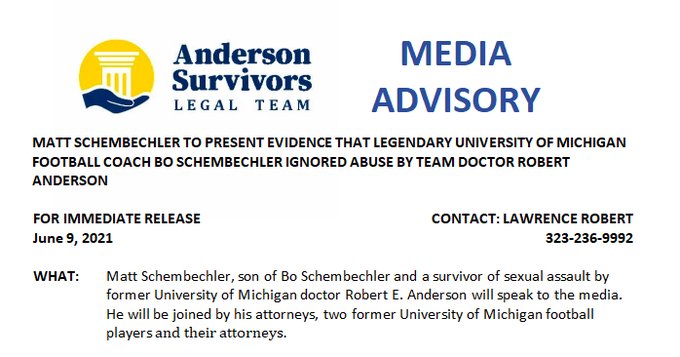 The son of the late, famous University of Michigan coach Bo Schembechler will come forward on Thursday to accuse the team’s former doctor, Robert Anderson, of sexually abusing him. But Matt Schembechler is expected to go a step further in a bombshell Thursday press conference. He will also allege he disclosed the abuse to his dad, and will talk about the coach’s “failure to protect him and other athletes,” according to a statement. Schembechler is expected to detail the allegations alongside former Michigan players Daniel Kwiatkowski and Gilvanni Johnson.

Last month, a report from law firm WilmerHale contained the testimony of 300 people, some of whom said university officials—including Bo Schembechler—knew about Anderson’s abuse and did nothing to stop it. It’s not the first time Schembechler has accused his adoptive father of wrongdoing. He previously sued Bo and the university for breach of contract in 1999, claiming the two tried to sabotage his efforts to turn old stadium bleachers into souvenirs. The elder Schembechler died in 2006, while Anderson died in 2008.