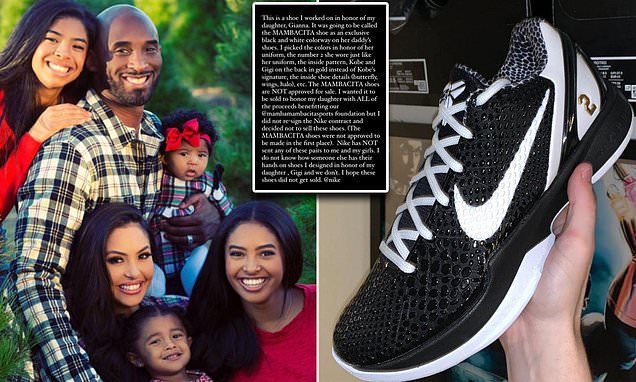 Vanessa, 39, who is the wife of late NBA star Kobe Bryant, vented her outrage at Nike on Instagram Stories (inset), hitting out at the brand after shoe photos appeared online. She shared an image of the sneaker design that appears to have been shared on social media (right) and revealed that the shoes were never meant to be made – and that her late husband’s contract with Nike was never re-signed. Kobe, who died in a 2020 helicopter crash that also claimed the life of his daughter Gianna, had a years-long contract with Nike that expired in April. Vanessa explained in her Instagram Stories post that she chose not to re-sign the deal with the brand after Kobe passed away, and ultimately the shoes were therefore never signed off for production. Prior to the contract’s expiration, she said she had discussed a Mambacita sneaker design with the brand, but never authorized the collaboration. Despite this, the exact design she worked on appears to have been made and it seems as though the sneakers have been distributed to a handful of retailers.